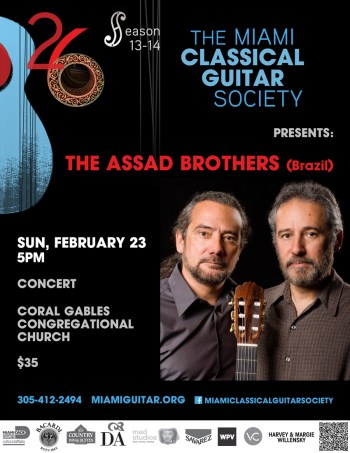 Brazilian-born brothers SÃ©rgio and Odair Assad have set the benchmark for all other guitarists in innovation, ingenuity and expression. The Grammy-winning duo are renowned for their seamless collaboration and impeccable guitar technique, performing Baroque, classical and Romantic masterworks, as well as original pieces. Their exceptional artistry and uncanny ensemble playing come from both a family rich in Brazilian musical tradition and from studies with the best guitarists in South America.

The Assad Brothers have played a major role in creating new music for two guitars, and their virtuosity has inspired a wide range of composers to write for them including Astor Piazzolla, Terry Riley, RadamÃ©s Gnattali, Marlos Nobre, Nikita Koshkin, Roland Dyens, Jorge Morel, Edino Krieger and Francisco Mignone. They have worked extensively with such renowned artists as Yo-Yo Ma, Nadja Salerno-Sonnenberg, Egberto Gismonti, Fernando Suarez Paz, the inimitable Paquito Dâ€™Rivera. Their international career began with a major prize at the 1979 Young Artists Competition in Bratislava.

The Assadâ€™s repertoire includes original music composed by SÃ©rgio Assad and his re-workings of folk and jazz music as well as Latin music of almost every style. Their standard classical repertoire includes transcriptions of the great Baroque keyboard literature of Bach, Rameau and Scarlatti and adaptations of works by such diverse figures as Gershwin, Ginastera and Debussy. The Assads are also recognized as prolific recording artists, primarily for the Nonesuch and GHA labels.

Donâ€™t miss this opportunity to see the finest guitar duo in the world, Assad Brothers, in Concert!