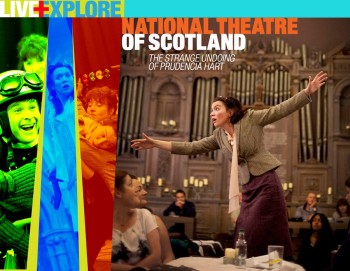 Pull up a chair and wet your whistle for an evening of anarchic theater, live music and strange goings-on as Miami Dade Collegeâ€™s (MDC) MDC Live Arts takes the theater into a favorite Miami destination: the bar. A runaway hit of the 2011 Edinburgh Fringe, National Theatre of Scotlandâ€™s The Strange Undoing of Prudencia Hart immerses audiences in a one-of-a-kind theatrical experience. The show is filled with rhyming couplets, whiskey shots and wittily wild karaoke as Prudenciaâ€™s story unfolds among and around them. This story of love, music and the Devil takes up residence for six performances at Bar 337 (formerly PAX), a bar at the intersection of Little Havana and Brickell from Wednesday, February 19 through Sunday, February 23, 2014.

One wintry morning, Prudencia Hart, an uptight academic, sets off to attend a conference in the Scottish Borders, the region of Scotland that borders England. As the snow begins to fall, she finds herself trapped in a secluded bar with strangers, only to be swept away on an enchanting, dream-like journey of self-discovery full of magical moments and devilish encounters.

Winner of the Herald Angel award at the Edinburgh Fringe Festival, â€œThe Scotsmanâ€ gives it five stars and â€œThe Heraldâ€ declares, â€œYou shouldnâ€™t miss this show for the worldâ€¦.(itâ€™s) rambunctiously life affirming and touchingly beautiful.â€ The National Theatre of Scotland’s company of actors and musicians indulge audience in an evening of supernatural storytelling, music and theatre inspired by traditional Scottish Border Ballads, Robert Burns and the poems of Robert Service that â€œsubverts the traditional poetic formâ€ according to Scotlandâ€™s The Guardian.

MDC Live Arts Executive Director Kathryn Garcia was drawn to the unconventional production in 2012 after seeing it live in Washington DC. â€œItâ€™s one of the top theater experiences Iâ€™ve ever had,â€ she said. â€œThe show literally happens all around you. The cast â€“ which serves as both the actors and the musicians – engages the audience with such inventiveness and fun that you canâ€™t help but be swept up in its magic.â€

The Strange Undoing of Prudencia Hart is the product of a weekend visit to a Kelso pub in the Scottish Borders by playwright David Greig, director Wils Wilson and composer Alasdair Macrae. What began as simple research on Scottish Border ballads soon became the inspiration for the show. Border ballads are a collection of songs from the region where England meets Scotland, a place with a long tradition of balladry. The Border ballads are usually sung unaccompanied and with no chorus, but with repeating motifs and recurring themes, often about the supernatural.