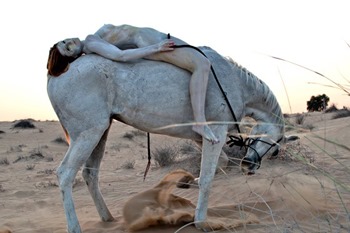 The University of Miami is pleased to present Bodypaintography: An exploration of Sentiment, Composition and Body Language by Cynthia M. Fleischmann. Her exhibition will feature naked individuals formally painted and photographed into various environments to create and capture a dialogue between body and place. Her photography encourages the natural human form to be seen as a work of art, highlighting colors, patterns and messages that are found in the world around us that she paints onto the form, finalized with red hands.

Cynthia Fleischmann grew up in KÃ¼snacht, Switzerland until she was 10, spending most of her time outdoors observing, playing sports, running around naked and drawing. Her appreciation for photography developed from her father’s love for American pioneer photographers such as Ansel Adams, Edward Weston and Paul Strand, whose works lined the walls of his gallery Galerie Zur Stockeregg. Moving to Dover, Massachusetts, with her mother and three older sisters imposed a new culture in which English became her prominent language. She was passionately involved in creating sets for school musicals and was nominated as most artistic in her high school. Cynthia has a drive for experimenting, and in 2009 she manifested her painting and photography passions into one art form she calls Bodypaintography. She received her Bachelor of Arts Degree from the University of Miami in 2010 and is completing her MFA in photography. This is her MFA Graduate exhibition.