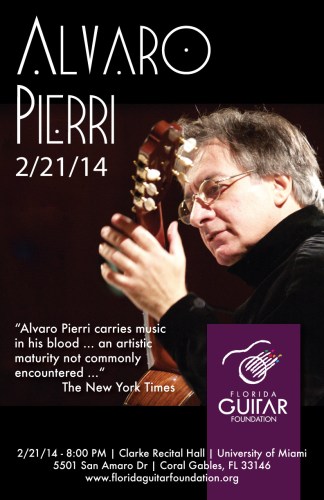 Alvaro Pierri is internationally acclaimed as a leading personality in the world of the guitar. Press reviews around the world praise â€œhis breathtaking phrasingâ€œ… â€œhis masterly thought-out interpretationsâ€œ…and â€œthe unmatched musical colour spectrum that he creates on the guitarâ€œ.

He was born in Montevideo in Uruguay, in a family of musicians. From the age of 11 he was already receiving awards and first prizes in international guitar competitions. He studied among others with his aunt Olga Pierri, the composer Guido Santorsola and Abel Carlevaro.

Since his brilliant concert debut in New York and his debut in Germany with the string soloists of the Berlin Philharmonic Orchestra, Alvaro Pierri is a regular guest at major concert halls and radio and television stations in Europe, North and South America and Asia. Contemporary composers such as Leo Brouwer, Guido Santorsola, Francis Schwartz, Jacques HÃ©tu, Abel Carlevaro, Carlo Domeniconi, Dusan Bogdanovic have written major works for Alvaro Pierri. He shared the stage with artists like Astor Piazzolla, Frank Peter Zimmermann, Terry Riley, Leo Brouwer, Charles Dutoit, etc.
Several of his CDs have been honored with prices like the coveted Canadian FELIX award for the best classical CD of the year. Recently Pioneer Classics Japan brought out a DVD featuring Spanish and South American guitar music, and Deutsche Grammophon re-published a DVD, Alvaro Pierri performing in duo with Astor Piazzolla.
Alvaro Pierri is also a worldwide acclaimed teacher. He was professor at the University of Santa Maria in Brazil and later at McGill University and the UQAM (Academy of Music) in Montreal, Canada. In 2002 he was appointed professor at the famous Academy of Music in Vienna (today University of Music and Performing Arts). He gives master classes at major music festivals such as the New York Manhattan Masters, GFA Guitar Foundation of America, at the Mozarteum Summer Academy in Salzburg, Vienna Masterclasses, Villa Musica, and in Tokyo, Osaka, Hong Kong, Shanghai, Seoul, Brazil, etc.

In recognition of his outstanding artistic talent and carreer and his permanent enriching contribution to the culture, 2008 Alvaro Pierri was appointed as honorary citizen of his hometown Montevideo.

The Florida Guitar Foundation is a non-profit organization dedicated to the awareness, education, promotion and appreciation of the classical guitar, an instrument of unsurpassed beauty and versatility. The Foundation sponsors public performances by world-renowned artists and aficionados, and strives to create and support a guitar community open to teachers, students, performers, and the listening public.