Reception honoring the life and legacy of Leonard Turkel 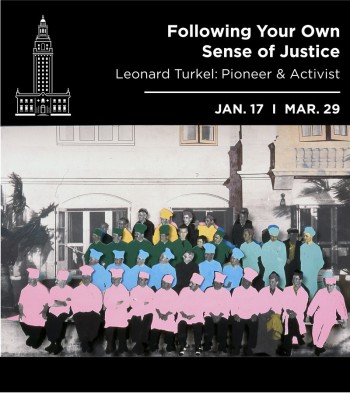 Leonard Turkel (1930 â€“ 2011) was coined the â€œFather of Florida Condominiumsâ€ by The Miami Herald and is noted as the pioneer of the Florida condominium development boom. A native of Bronx, New York, he was a U.S. Air Force veteran, developer, restaurateur, businessman, and civil rights activist who played violin and guitar, pitched baseball, had a great left-handed hook shot, and created numerous collages bringing historical photographs to three dimensional form.

Following Your Own Sense of Justice is a retrospective of his rarely seen artwork and is a true testament to the legacy of a man that proved to be one of Miamiâ€™s greatest mavericks of civic equality and community building. The exhibition is more than just an presentation of one manâ€™s avocation. Itâ€™s the portrayal of a socially conscious movement, created by a singular vision, devoted to living equally for all.