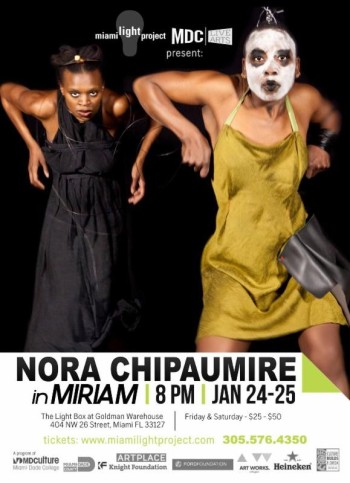 Miriam is conceived, written and choreographed by Chipaumire and directed by Eric Ting.
Chipaumire creates her first character-driven work – a deeply personal dance-theatre performance that looks closely at the internal battles women face between public expectations and private desires, between selflessness and ambition and between the perfection and sacrifice of the feminine ideal. With an original score by six-time Grammy nominee Cuban composer and pianist Omar Sosa, Miriam layers text, sound and images that enrich the mysterious and haunting world of Chipaumire’s creation.

The inspiration for Miriam springs from the cultural and political milieu of Chipaumire’s own South African childhood, the symmetries in her and Makeba’s exiles and her self-discovery as an artist. But Miriam also reverberates with other literary and legendary influences, including the writings of Joseph Conrad and Chenjerai Hove, and the Christian iconography of Mary.

Chipamuire describes the work as “a solo for two people,” the persona embodied by Chipaumire emerging from a pile of rocks onstage to convey-through movement and text-a woman’s struggles with the burden of objectification and the weight of resistance in a world defined largely by men. Her efforts are abetted and haunted by an otherworldly character, both angel and devil, performed by Bronx-born Okwui Okpokwasili. In their interplay, Miriam renders in vivid images the intensity of women who fight to create themselves despite the dual legacies of strict cultural traditions and imperialist racial views that define female beauty and power.