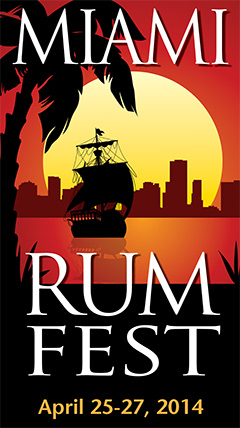 The Miami Rum Renaissance Festival, the largest gathering of rum producers, professionals and enthusiasts in the world, returns to the Doubletree Hotel Miami Airport Convention Center for three days of rum tastings, seminars and festivities April 25 to 27, 2014.

Celebrating its sixth year, the 2014 Miami Rum Renaissance Festival has greatly expanded to feature more than 50,000 square-feet of exhibits and more than 80 rum producers showcasing hundreds of award-winning and notable rum brands and expressions from around the world.

“We’re expanding the size and scope of the festival again this year,” said show manager Robin Burr. “Rum producers from many more countries will participate in the exhibition. There is no better way to discover all the amazing rums that world has to offer.â€

A grand tasting, expert seminars, lively entertainment and an Island Lifestyle Showcase are just a few of the experiences on tap at this yearâ€™s festival:

Grand Tasting Exhibition
The three-day Grand Tasting Exhibition will give attendees the opportunity to sample more than 200 rums from more than 30 countries around the world and mix with rum makers and rum ambassadors. A Trade-Only Preview exclusively for members of the spirits industry will be held on Friday, April 25 from 3 p.m. to 7 p.m. at a discounted admission price of $20.00.

World Tiki Cocktail Championships
Mixologists from the United States and United Kingdom will compete for Tiki cocktail immortality and bragging rights in the World Tiki Cocktail Championships sponsored by Bacardi Rum. The top Tiki cocktail bartender from each country will travel to Miami to compete before a judging panel of local and international Tiki experts and will be judged based on showmanship, presentation, execution, taste and creativity. The competition will be held throughout the week and the results announced on Sunday, April 27 at the rum festival.

Island Lifestyle Showcase
In addition to the Grand Tasting Exhibition with more than 200 rums, the festival will present a myriad of Island Lifestyle exhibits. Attendees can explore a treasure trove of cool island fashions, arts and crafts, Tiki collectables, home dï¿½cor accessories, travel opportunities and more on Saturday and Sunday.

Rum enthusiasts from all over the world are coming to Miami to experience the ultimate rum tasting experience. “We’re seeing a great increase in travelers attending the rum festival from all the islands of the Caribbean, Central and South America, as well as Europe and Asia,” said Burr.

Miami is the number one rum market in the world. Among many world-class festivals in South Florida, The Miami Rum Renaissance Festival was voted the number one festival in Miami by Miami New Times.

International Rum Expert Panel judges from across the United States, Italy, Germany, France, Spain, England, Australia, Sweden and Holland will converge in Miami to judge rums for their annual tasting competition, awarding the best of the best with gold medals.