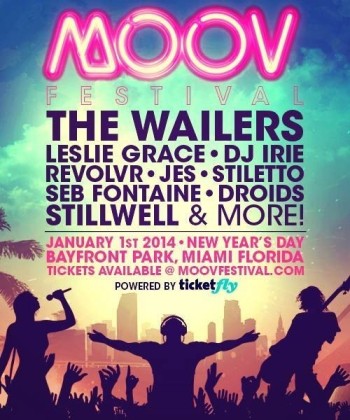 The MOOV festival celebrates music and the diversity of culture in the city of Miami. Therefore its lineIup consists of many genres all joining together to bring in the New Year with positive vibes and good fun. Artists from all over the globe will unite at Bayfront Park to commemorate the first day of 2014. Below are the details for the artists who will perform at MOOV Festival.

Headlining:
The Wailers, a legendary Jamaican band whoâ€™s reggae roots promote peace, love and equality through their Rastafarian message.
Revolvr, hit the electronic music scene in 2011, and since then has already had multiple #1 tracks in the Billboard charts. His talent goes into all genres of Electronic Music including House, Electro, Progressive, Tech House.

Other Artists on Lineup:
David Puentez, began his passion for EDM in Ibiza, and later played in Stuttgart and Frankfurt on a consecutive basis. His break was in â€œCity Beats Liveâ€, a program in the most popular German radioIstation, bigFM where he opened for djs such Moguai and Paul Van Dyk. Nowadays he has the support of colleagues like David Guetta, Tiesto, Bob Sinclar, Roger Sanchez, Nervo and Fatboy Slim.
Stillwell, a Tech House DJ with intense melodies enough to get any crowd jumping.
Hor!zen, stands out for their Southern Swag. This band roots from the Island Kingdom of Tonga and their talent has led them to tour all over the map.
Leslie Grace, of Dominican background stands out for her bilingual bachata songs. Her song, “Will you love me tomorrow”, hit the #1 spot on Billboards Latin Radio chart.
Dayride Ritual is comprised of Michael Vaughn on lead vocals, Dave Thomas on bass guitar, David Siclari on guitar and Mike Silvo on the drums. This band of friends get their influences from artists such as, Led Zeppelin, KISS, Guns N’ Roses and Alice in Chains to name a few.
DJ Irie, a Miami native, well known as the official DJ of the Miami Heat Basketball team and for his #1 mix show on WEDR 99 Jamz.
Stiletto, a San Diego native, is well known for her tunes played on Youtubeâ€™s Electronic Music Channel Monstercat.
Jes, was signed by Tiestoâ€™s Black Hole Recordings. Her legendary release “As the Rush Comes” with Motorcycle has made her stand out in the EDM genre.
Avenida Zero, is a Spanish popIrock band from Miami formed in late October of 2010. Their Intense lyrics, big sound, catchy chord progressions and advanced production identify their sound as one of a kind. Comprised of lead singer Lisa Abreu, bassist Raydel Fernandez and drummer Gabriel Beltran, this group will put the crowd to dance.
Droids, the longest running band on the Vegas strip, writes their own music and are also a popular cover band. Members of the band include lead vocalist and drums Terry Warren, bass guitarist and vocalist, Frank “The Godfather” Cusenza, Mitchell Sigman on guitar, keyboard and vocals and lastly, Brendan Scholz on guitar and lead vocals.
Joseph Areas, is a talented Miami based DJ/Producer, whose love for EDM has landed him success rapidly which has allowed him to provide good quality dance music across the globe.
Atrasolis, Miami producer with highIenergy tunes and deep beats. He experiments with sounds of dub step with fidget/electro that can be most readily associated with international phenomenon Skrillex. The popularity of the style has caused him to explode on the scene.
Noel Sangar, is considered Electro/Trance/ Progressive house producer and with his skills as a songwriter he has entered into popItrance sampling the entire vocal from his wellIknown anthem “No Greater Loveâ€. Another of Sanger’s full vocal productions, “Miracleâ€, spent 10 weeks on the crossoverIoriented Billboard Magazine club play chart. Sangar has played all over North America, South American and Japan.
Afrobeta, started their musical voyage in 2006. This electronic duo made their debut with their EP “Do You Party” which put them on radar while exhibiting their diverse sounds. They are unmistakably a band that transcends all genre classifications while getting the crowd fired up.