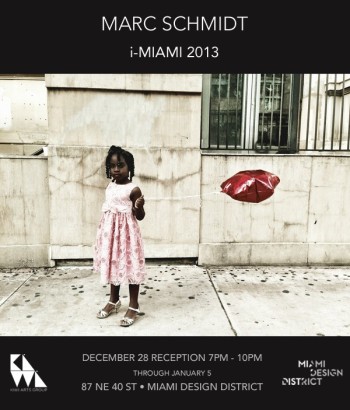 They say a picture is worth a 1,000 words, in which case ‘i-Miami 2013,’ Marc Schmidt’s debut photography exhibition, speaks volumes. Reminiscent of Walker, Vishniac, Atget, Lange and Arbus, Marc Schmidt’s photography is strong and thought-provoking, reflecting the zeitgeist of the postmodern World. Using the simplest of tools, his iPhone camera and his bicycle for transportation, Schmidt has created a poignant visual essay of the inner city and its denizens. Schmidt’s affinity and respect for his subject matter are evident in the narrative structure of his compositions and the intuitive poetic resonance of his imagery.

Marc Schmidt was born in Chicago and raised in Hamburg. A physician by profession, Schmidt has had a love affair with the art of photography since his teen years when he started documenting street scenes in Hamburg. Schmidt has traveled around the world capturing life in all its aspects for over a decade and has previously published his work only once; a photography essay on a refugee camp in Ruanda. He has been running a successful photo rental studio in Hamburg since 2001. In 2013 he opened CU-1 Gallery in downtown Miami and has been documenting Miami street life since April of the same year.