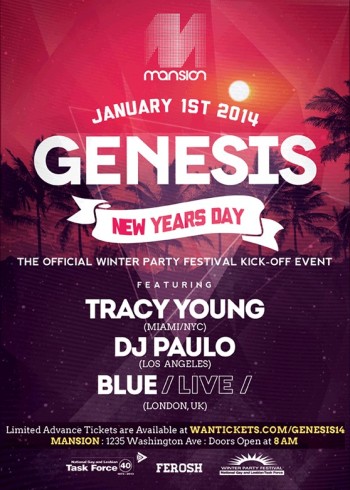 It originated over 10 years ago as a simple attempt to break away from the ordinary New Yearâ€™s Eve celebrations, FEROSHâ€™s legendary GENESIS event has now become a tradition to dance music lovers.

From neighboring states and continents, over 3000 guests flock down to Miamiâ€™s South Beach every year to start their New Year with the big room sound of the world renowned DJ/Producer Tracy Young and her special guest performers. This year DJ Paulo from Los Angeles will be spinning along side Tracy Young. At 8am New Yearâ€™s Day, January 1st, 2014, GENESIS will return to Miamiâ€™s most famous club, Mansion and once again provide a sanctuary for those who refuse to take part in South Beachâ€™s chaotic New Yearâ€™s Eve celebrations.

Aware of our role within the LGBT community, GENESIS 2014 supports our Florida LGBT community through our official partnership with the National Gay and Lesbian Task Force. Together we celebrate the recognition of same-sex marriages by the federal government and support the efforts to overturn Floridaâ€™s ban on same-sex marriage. The National Gay and Lesbian Task Force is a non – profit organization founded in the 1973 with a mission to build the grassroots power of the lesbian, gay, bisexual and transgender (LGBT) community by training activists, equipping state and local organizations with the skills needed to organize broad-based campaigns to defeat anti-LGBT referenda and advance pro-LGBT legislation, and building the organizational capacity of the LGBT movement. A portion of GENESIS 2014 proceeds will be donated to The National Gay and Lesbian Task Force.