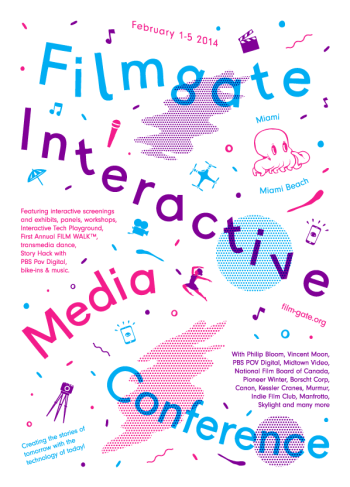 FilmGate Interactive, South Floridaâ€™s first fully interactive film festival and technology conference, presented by the Indie Film Club Miami, emerges for a second year, January 30 – February 5, 2014, throughout various South Florida venues, to engage the community in a showcase of the latest ideas and innovations of modern storytelling and audience engagement.

Based on the power of transmedia (cross-platform) storytelling and its ability to deliver and transform the way stories are told and experienced, FilmGate Interactive will present a host of events that employ various entertainment formats linked together such as film, contemporary dance, theater, music, gaming, mobile, and live events, to tell a single story. Offering a mix of interactive activities, with film and technology at the core, the 2014 line-up includes:

CNTL/ALT/DANCE Transmedia Dance Performances curated by Pioneer Winter
January 30 – February 1, 2014, visit Film-Gate.org for showtimes
Miami Light Project, 404 NW 26 Street, Miami, FL
FEE: $0 to $45
This interactive dance program includes, Drive-In Voyeur and Romantic Endings, Choreographed by Pioneer Winter and produced by Indie Film Club MIami. Drive-In Voyeur is an interactive performance that reflects on the time of late 1950s and early 1960s popularity of the drive-in movie using movement, contemporary dance and video projection. Romantic Endings pairs favorite romantic death scenes with contemporary dance performances and a curated food experience created by a surprise Miami Chef. The experience and professional â€œhand holdersâ€ are supplied. In TRPL QUINCE, quince being the traditional Hispanic coming-of-age/coming-out party for 15-year-old girls, the flamboyantly outrageous Cuban-American performer-choreographer-producer Octavio Campos is throwing himself not one but three quinces in a single performance. However, TRPL Quince, which will have its third showing at FilmGate 2014, looks nothing like the usual elaborately costumed party. Instead, Campos addresses a roiling mass of issues: his Cuban familyâ€™s refusal to accept his homosexuality and his desire to be an artist; the sometimes-troubled history of the men in his family; his reasons for making art; the looming challenges of middle age and mortality. â€œThis transmedia event is my quince, my walkabout, my bar mitzvah, my rite of passage, my view of Miami, Berlin and New York, in all of itâ€™s f*&#ed up glory!!! A celebration of Freedom and life and the ever-looming clock of mortality,â€ said Octavio Campos.

Hierarchy of the Lost Children Cult and Ritual Experience
(Note: Involves full nudity.)
January 31, 2014, from 9:00PM to 11:00PM
February 1, 2014, from 6:00PM to 9:00PM
O Cinema Wynwood, 90 NW 29 Street, Miami, FL
FEE: $25 for Indie Film Club Miami members/$35 non-members
The secretive HIERARCHY OF THE LOST CHILDREN cult will open itself to Miami audiences, with an immersive event that challenges your beliefs through all of your senses. Take part in demonstrations of the cultâ€™s recruitment techniques. Dig deeper into the cultâ€™s secrets through interactive side missions. Witness a rare initiation ritual. Watch the feature film that reacts to the audience in real time and changes with each screening. Resist if you can, but one of you will join us. Created by Mark Harris, a writer, software architect and filmmaker focused on immersive and interactive storytelling, who is currently a partner in the immersive entertainment studio Murmur.

First Annual FILM WALKâ„¢
February 1, 2014, from 6:00PM to 10:00PM
FEE: FREE and open to the public
The first annual FILM WALKâ„¢ is a community building initiative that takes place throughout various locations off NW 2nd Ave between 29th and 24th Street in Wynwood. Interactive exhibits, performances and screenings by South Floridaâ€™s film festivals and community organizations come together for this celebration of visual storytelling.

A Vincent Moon Retrospective
February 1, 2014, from 4:00 pm – 6:00 pm
Miami Beach Cinematheque, 1130 Washington Avenue Miami Beach, FL 33139
FEE: $12
OKO, Carnets de Russie/The Other Russia is a series of short films shot in Russia in 2012, focusing on the music of the ethnic minorities of this huge land. Far from the clichÃ©s we tend to have about the country, the films uncover rare music from the Caucasus republics of Ossetia, Chechnya, Dagestan, as well as from the Buddhist land of Kalmykia and the northern republic of Karelia. Vincent Moon will appear live through SKYPE for the Q&A at the end of the screening. His first visit to Miami in June 2014, will complete the retrospective and will culminate with a master class.

The Interactive New Technology Playground
February 1- 2, 2014, from 11AM to 5PM
Rubell Family Collection, 95 NW 29 Street, Miami, FL
FEE: Free and open to the public
Curated by Midtown, Video, the Interactive Tech Playground is a new and original way to exhibit new technology, created for the content producers of tomorrow. It is a truly immersive experience for the attendees, including a live set, with actors and art objects. Includes exhibitors such as Sony, Arri/Alexa, Schneider Optics, Canon, Kessler Cranes, Manfrotto, etc.

The Skype Show or See You in August
February 1-2, 2014 from 4:00PM to 6:00PM
FEE: $25 for Indie Film Club Miami and Miami Light Project members; $35 for non-members
In November of 2010, Jody Christopherson and Michael de Roos formed the indie-folk-beatbox-rock band Greencard Wedding in Crown Height Brooklyn. In December of 2012, Michael’s visa ran out. He moved back to Holland and Jody and Michael discovered they couldn’t harmonize via Skype. But they could write a play. And music. . . and maybe get an artist visa. This transmedia musical is an exploration of the ways technology can enable us to transcend boundaries, uniting artists with each other and their audience. There is also cake. (Performed in English.)

3-Day Master Class with Digital Image Creator Philip Bloom: Making the Eco Doc
February 3, 2014 through February 5, 2014, from 9:00AM to 8:00PM
The Betsy South Beach, 1440 Ocean Drive, Miami Beach, FL 33139
FEE: $1199 (holiday rate before December 24, 2013)
Philip Bloom, British filmmaker and one of the worldâ€™s best digital image creators, leads a three-day master class, Make the Eco Doc. Limited to 24 pre-selected participants, the group will be shooting and editing their own narrative eco documentary short. Presented in partnership with the Love the Everglades activist group, the hosted excursion will include a shuttle bus and an airboat ride into the world heritage site and home of 36 different threatened species, The Everglades, a wildlife haven and a home of the Miccosukee Tribe. For more, visit: http://bit.ly/1edDxG6

The Journal of Insomnia, an Interactive Experience presented by the National Film Board of Canada
Saturday, February 1, 2014, 6:00-9:00PM
O Cinema, 90 NW 29 Street, Miami, Fl
The Net never sleeps. It is always daytime somewhereâ€”and nighttime somewhere else. The Internet is insomnia. A Journal of Insomnia invites insomniacs to collaborate in a web-based reflection on what keeps them up at night. This interactive documentary offers an utterly original encounter with a disorder that affects one in three people in the developed world. In September 2012, insomniacs around the world began sharing their stories on nfb.ca/insomnia. Thousands have contributed webcam testimonies, written accounts and original artworkâ€”material that forms the heart of A Journal of Insomnia. The National Film Board of Canada will summon us to an appointment with sleeplessness that provides arresting new perspectives on contemporary existence and the anxiety that so often underscores our daysâ€”and our nights.

Individual tickets to FilmGate Interactive are now on sale with upgrade package options that range from Student ($60), All Access ($125), and a special Pink Kraken ($250) bundle. Package highlights include access to exclusive VIP and industry functions, an Indie Film Club Miami membership, a commemorative t-shirt and tote bag. For package details and restrictions, visit Film-gate.org.

Bringing together cross-mediaâ€™s leading international creators, thinkers and practitioners from across the fields of film, TV, interactive, online, mobile, gaming, publishing and live events, FilmGate Interactive will showcase the latest ideas and innovations of modern storytelling, audience engagement and business practices. A new type of storytelling, cross-media combines multiple layers and social integration together, producing a meta-narrative structure bigger in sum then the components of its parts. For more information visit, Film-Gate.org

Created for the next generation of filmmakers and immersive visual storytellers, Indie Film Club Miami is a not-for-profit organization that binds and strengthens the community through a variety of programs including monthly screenings, workshops, percolators, meet-ups, as well as production support. Through education, assistance, mentorships, partnerships and our interactive film and new technology conference FILMGATE Interactive, the Indie Film Club redefines Miamiâ€™s booming creative landscape. For more, visit IndieFilmClubMiami.com