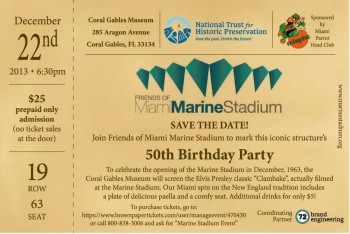 This December, the Miami Marine Stadium turns 50! To celebrate, Friends of Miami Marine Stadium will host a screening of the Elvis Presley film â€œClambakeâ€–scenes of which were shot at the Marine Stadium in 1967. The evening will include a â€œLatin clambakeâ€ featuring paella, a cash bar, and a comfy seat to watch the film. The event will be held outdoors in the patio (indoors if necessary) at the Coral Gables Museum currently featuring the exhibit â€œConcrete Paradise: Miami Marine Stadium.â€Â Our Miami spin on the New England tradition includes the movie, a plate of delicious paella and cash bar drinks for only $5!

The film, which tells the story of an heir to an oil fortune (Elvis Presley) who trades places with a water ski instructor at a Florida Hotel, features Elvis in his youth as a budding heartthrob and submerses him in the 1960â€™s surfside antics of the South Florida lifestyle. Those attending the screening will see the vintage hydroplane boat racing shot on sight at the Marine Stadium!

Built in 1963 for boat racing, the Marine Stadium had a tremendous opening night which featured the Tommy Bartlett Water show, a 17 piece jazz orchestra, a 40 person choir singing selections from the opera Die Fledermaus, and fireworks. The Stadium hosted boat races, Easter Sunrise Services, spectacles of all kinds, and performers including Jimmy Buffett, Ray Charles, and The Who during its years of operation from 1963 to 1992. The Stadium was shuttered in 1992 after Hurricane Andrew. But, in 2008, a new non-profit group–Friends of Miami Marine Stadium–was formed to develop a plan to restore and operate the Marine Stadium. In July of 2013, the City of Miami approved the site plan as proposed by Friends of Miami Marine Stadium and fundraising has commenced.

The Clambake evening is sponsored by the Miami Parrot Heat Club. The Parrot Head Club is comprised of devout fans of Jimmy Buffett, perhaps the most beloved of all Marine Stadium performers. â€œThere has not been a single event that has united fans of Jimmy Buffett more than that August, 1985 Live By The Bay Concert at the Marine Stadiumâ€, said Brenda Braley, President of the Miami Parrot Head Club. â€œThe people who were there still talk about it 28 years later while the rest of us dream that it will happen again.â€

To support the renovation of the Miami Marine Stadium click below to donate to the National Trust for Historic Preservation fund.
Click Here To Donate