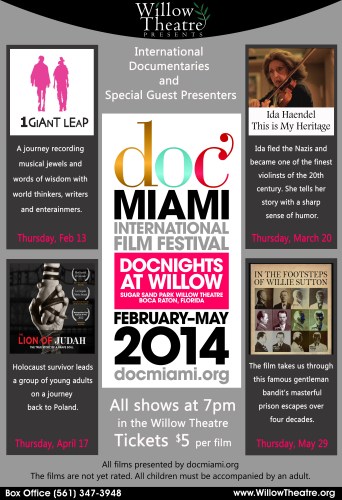 The DocMiami International Film Festival will kick off a documentary film series, â€œDocNights at Willow,â€ in the spring at Sugar Sand Park in Boca Raton. Tickets can be purchased at the Willow Theater Box Office and online.

â€¢ 1 Giant Leap- What About Me? on February 13: Directed by Jamie Catto and Duncan Bridgeman, this UK documentary explores the universal complexities of human nature through music and film.
Presenting the film will be UN World Peace Representative for the Educators of World Peace, artist and author Jacqueline Ripstein. A live performance will accompany the film, featuring Boca Raton-based BMI Artist Richard Warren Rappaport and American Idol Season Four Semi-Finalist and former South Florida X-Factor Fast Pass winner Tiffany Miranda.
â€¢ Ida Haendel: This is My Heritage on March 20: Written and directed by Christine Jezior, the film is an honest account of growing older from the perspective of one who is considered one of the finest violinists of the 20th century.

â€¢ Giselle Brodsky, Director of the Miami International Piano Festival, will introduce this incredible film, joined by internationally-renowned violinist, the eponymous Ida Haendel. Ms. Haendel has been a Miami resident for over twenty years.

â€¢ The Lion of Judah on April 17: Written and directed by Matt Mindell, the film tells the story of Holocaust survivor Leo Zisman who leads a group of young adults on a journey back to Poland and through humanityâ€™s darkest period.

â€¢ In the Footsteps of Willie Sutton on May 29: Directed by Boca Raton resident, Rich Gold, the film chronicles Americaâ€™s most famous bank robber of the 20th century who escapes three times from maximum security prisons. The film follows this gentleman banditâ€™s criminal career that spans over four decades.

“We are very excited to partner with DocMiami to bring this new film series to our audience,â€ said Stacee Lanz, Special Event Coordinator at Sugar Sand Park Community Center. â€œThe Willow Theatre is the perfect venue to premier these films because of its intimate size and central location in the heart of Boca Raton.”

Tickets are $5.00 per film and can be purchased at the Willow Theatre Box Office at Sugar Sand Park Community Center at 561-347-3948, or online at: www.willowtheatre.org. Each film begins at 7:00 pm, and the films are not yet rated, so adult supervision is required.