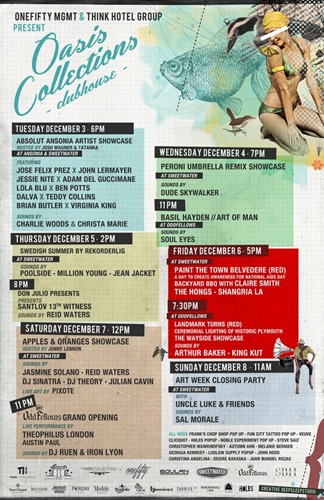 Please RSVP to michelle@stuntmanpr.com, including the event(s) to which you would like to attend.

Oasis Collections is teaming up with Sweetwater to celebrate its expansion into Miami with 6 days of parties and events throughout the week.

Oasis Collections is a full-service hospitality company offering luxury, design-focused, short-term rentals in Latin America with recent expansions into Miami and New York City. Oasis connects travelers with high-end properties, handpicked by experts for an authentic, rich experience in highly sought after travel destinations. Oasisâ€™ curated properties offer a unique alternative to hotels that provide a combination of space, convenience and comfort that is unlikely to be found in a hotel or in a self-researched property rental.

Sweetwater is a hidden cool hangout decorated with salvaged wood, serving as a retreat and social space for locals to enjoy an organic and local farm-based food menu. Members can also enjoy a variety of events that include yoga classes, movie nights, a day of pampering and ice cream socials.