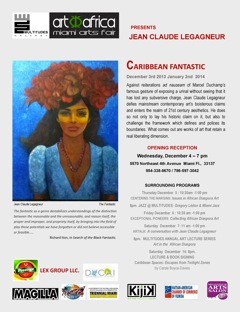 Sunday, December 1st, 8pm-10pm
DÃ®ner Preview: The Hundred Mostâ€¦
The legendary hospitality and elegance of reception of Mr. & Mrs. Anthony Box will be deployed once again in this enchanted evening-presentation of a chosen masterworks to hundred mostâ€¦. personalities of South Florida

Wednesday December 4 : 7:30 PM-10 PM
Night Of Haitian Diplomacy : Opening Night
Under the patronage of the Haitian Government and the Consul General of Haiti in Miami , The Night of the Haitian diplomacy is at the heart of the dynamics of the New Cultural Diplomacy policy of the Haitian government. The presence of Haitian diplomats in the United States as well as of those in the Caribbean, Africa and beyond is anticipated. With artists, Hollywood stars, great collectors and other guests of the city, this night will present African Diaspora in all its potentialities .

Thursday December 5 : 8 PM-10 PM
Jazz @ Multitudes Gregory Ledon & the Miami Jazz quartets
Rooted in the tradition of Miles Davies, he encountered at a very young age, Ledonâ€™s style employs a more subdued approach than that found in other contemporaneous jazz idioms. His tonal sonorities of this player, similar to pastel colors which Miles believed was a lighter sound, thus more expressive.

Friday December 6: 8 PM-10PM
Hollywood United For Haiti: An Evening with Jimmy Jean Louis
The actor who masterfully interpreted historical consciousness through Toussaint Louverture: The Battle of the Eagles is also a humanitarian whose work focuses on the construction and operation of a school in the Haitian countryside. This auction night will be attended by the Hollywood stars with his fans colleagues and personalities of the arts and culture.

Caribbean Fantastic: The Work of Jean Claude Legagneur aims at reintroducing the Haitian master to the international public of Art Basel Miami. Absent from the South Floridian scene for decades, Jean Claude Legagneur comes back to Miami at a time when, contemporary art, exhausted by an at nauseam repetition of Marcel Duchamp’sâ€™ famous gesture of exhibiting a urinal, does not realize that it has lost all its potential power of subversion. Legagneur, far from this boisterous claim, remains within a more discreet approach with works that retain a real liberating dimension.

Caribbean Fantastic: is an exhibition of about Fifty works (50) by the Haitien master artist.

Caribbean Fantastic: is organized by the Florida Africana Studies Consortium of South Florida (FLASC), the Consulate General of Haiti in Miami, Hollywood Artist United for Haiti and the local / international committee. The exhibition runs from 1 December 2013 to January 2, 2014 with opening night coinciding with the official opening of Art Basel Miami December 4, 2013.

Caribbean Fantastic: will be accompanied by a series of arts programs and related events designed to highlight Caribbean and African Diaspora aesthetic productions and Black contemporary issues in these times of globalization and transnationalism.