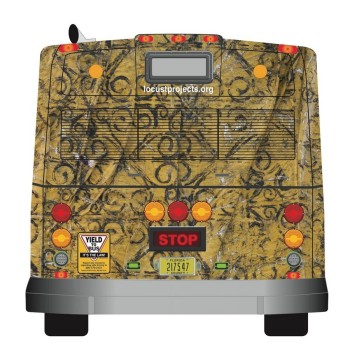 Now celebrating its 15th year presenting experimental contemporary art, Locust Projects is pleased to announce artist Angel Otero has been commissioned to create a work for Art on the Move, part of Locust Projects’ ongoing public commissions initiative. The New York based Puerto Rican artist embeds personal history in his densely stratified abstract paintings. Oteroâ€™s investigational process begins with thickly layered compositions painted on large planes of glass. These â€œoil skinsâ€ are then scraped off in sheets and draped onto canvas, revealing layers of under painting and distorting the original image. Oteroâ€™s artwork will appear on the backs of Miami Beach buses and at Miami Metro Rail stops in December 2013.
Art on the Move features specially commissioned artistsâ€™ projects in public spaces around Miami. Through this effort, new work by artists such as Nicole Eisenman, Agustina Woodgate and Liam Gillick has appeared on billboards, bus shelters and bus backs throughout the county.