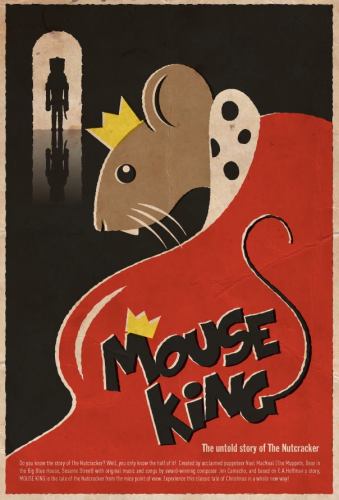 This original stage spectacular tells the story of The Nutcracker from an as-yet unseen perspective â€“ the point of view of the mice characters â€“ and, in the process, gives that perennial classic an imaginative new emphasis through the lens of modern musical theater. A cast of professional performers and puppeteers and supported by a group of local child actors has been specially selected to bring this family-friendly holiday production to life.

Tickets for Mouse King cost $20 and can be obtained via Brown Paper Tickets: http://mousekingmusical.brownpapertickets.com or 800.838.3006.

Noel MacNeal launched his career performing on PBSâ€™s award-winning Sesame Street, where he honed his craft with puppetry legends Jim Henson and Frank Oz. Heâ€™s been a performer on Sesame Street for almost thirty years and trains puppeteers in Japan, Mexico, South Africa, Jordan, Palestine, and India and, most recently, Pakistan, for the Sesame Workshop international co-productions of Sesame Street. Noel has also performed with the classic Muppets of The Muppet Show.

For the past decade, Noel has been the spirit and voice of Bear, the gentle and lovable star of the Emmy Award-winning series Disneyâ€™s Bear in the Big Blue House and the Disney Channel morning series, Breakfast with Bear. In 2003, Noel received a Daytime Emmy Nomination as Outstanding Performer in a Childrenâ€™s Series.

His repertoire of characters also includes Kako on the Nick Jr. series Oobi and Blue on Nick Jr.â€™s Blueâ€™s Room. Other roles include Magellan on the award-winning series Eureekaâ€™s Castle on Nick Jr., Madame Chairbird in the film Sesame Street Presents: Follow That Bird, Rabbit for Disney Channelâ€™s Emmy Award-winning series The Book of Pooh, Leon on PBSâ€™ The Puzzle Place, and Knock-Knock on The Great Space Coaster. In addition, heâ€™s performed with and/or for: Woody Allen, Bill Cosby, Whoopie Goldberg, Jerry Lewis, Mickey Rooney, Emma Thompson, Wayne Brady, Dave Chappelle, Donny and Marie Osmond, Gilbert Godfrey, Tom Bergeron, Regis and Kelly, and Matt Lauer and Katie Couric. (But not all at once.)

In addition to performing, Noel is a television writer whose scripts have been featured on PBS Kids Sproutâ€™s The Goodnight Show, Disney Channelâ€™s Bear in the Big Blue House, PBSâ€™ The Puzzle Place, The Magic School Bus and Cyberchase, and Nickelodeonâ€™s Eureekaâ€™s Castle and Gullah Gullah Island. He is also a script adviser and consultant for the international versions of Sesame Street, as well as a television director, having directed episodes of Bear in the Big Blue House and PBS Kids Sproutâ€™s The Good Night Show. More recently, heâ€™s added the role of author to his resume with his new, puppet-making book â€œTen Minute Puppets with Noel MacNeal,â€ from Workman Publishing.

Jim Camacho is one of South Floridaâ€™s most renowned singers, songwriters and multi-talented musicians. The recent release of a new five-song EP entitled Everywhere (Forward Motion/Broken Records) marked his first collection of new songs since his critically acclaimed album Beachfront Defeat in 2009. It provides yet another example of Camachoâ€™s extraordinary talents, skills heâ€™s demonstrated in his recordings and concerts, as well as his active involvement in theater, film, television, and radio. The recipient of numerous awards â€“ including New Times kudos for â€œBest Songwriterâ€ and â€œBest Acoustic Performer,â€ as well as the publicationâ€™s recognition for â€œBest Albumâ€ of 2009 â€“ Camacho has not only been an integral part of the South Florida music scene since the late â€˜80s, but also an emerging talent on the national stage.

Camacho marked his entry into theatrical realms, and specifically the musical stage, with his well-received original musical, Foolsâ€™ Paradise. The production was previewed in Miami and New York, and a full scale workshop â€” directed and choreographed by the celebrated artistic wunderkind Jonathan Cerullo â€” received a full staging. That was followed by Camachoâ€™s second original musical, Guru, which had its preview in Miami. More recently, he created, composed and premiered the critically acclaimed childrenâ€™s musical The Cavie Islanders & The Troll and later created a childrenâ€™s adaptation of his original musical Guru entitled The Guru of Gir. The original scores of both of these are to be released on Y&T Records.

Not content to stop there, Camacho worked with Emmy Award-nominated producer and puppeteer Noel MacNeal (Sesame Street, The Muppets) when the two men collaborated on the musical â€œTales of Amazing Trickstersâ€ which was performed at New Yorkâ€™s Bronx Zoo in 2012 and their new musical â€œThe Beasts of The Magical Worldâ€ is currently running there and receiving rave reviews from children and adults alike.

Camacho first made his mark with The Goods, a band that was widely-acknowledged as one of the most impressive outfits to emerge from Floridaâ€™s southernmost realms. ProtÃ©gÃ©s of the late, legendary producer Tom Dowd, the band released five albums throughout the â€˜90s, including the iconic rock opera 5 Steps to Getting Signed, which won the prestigious â€œAlbum of the Yearâ€ honors at the Florida Jammy Awards. The single â€œIâ€™m Not Averageâ€ from their critically acclaimed album Mint, reached number one on the Radio & Record charts in Florida, and eventually led to a major label signing with a division of Polygram Records and an extraordinary biographical documentary which aired on VH1.

Continuing to expound upon the engagingly melodic stance he procured with The Goods, Camacho went on to release three highly anticipated solo albums in the new millennium, garnering the Gold Remi award in the Music Video category at the 40th Annual WorldFest-Houston International Film Festival for his song titled â€œHoudini.â€ Camacho also contributed to several film and television soundtracks, including the Grammy-nominated, â€œTom Dowd & the Language of Music,â€ Paris Hiltonâ€™s â€œPledge This,â€ and â€œFatboy,â€ nominated for â€œBest Use of Music in a Documentaryâ€ accolades at the Sundance Film Festival. Whatâ€™s more, his song â€œI Donâ€™t Need You Anymoreâ€ (from the album Beachfront Defeat) was featured prominently in the soundtrack for the hit ABC family show â€œPretty Little Liars.â€