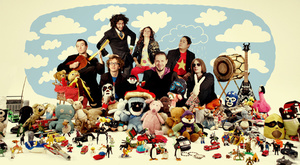 LA CHIVA GANTIVA starts in Brussels with a group of Colombian percussionists playing together, in order to feel closer to their homeland and its rich musical heritage. Pushed by a desire to assert their roots and reproduce Colombian rhythms of yesteryear, like less well known rhythms such as the Â«champetaÂ», the Â«chirimiaÂ» and the Â«mapalÃ©Â», LA CHIVA GANTIVA uses traditional Caribbean instruments such as Â«la tamboraÂ», Â«el alegreÂ», Â«el llamadorÂ» and Â«maraconesÂ». LA CHIVA GANTIVA does not stop there, they also incorporate instruments like the bass guitar, the clarinet and the saxophone which reflect the diverse influences of the group: Colombian (with the likes of Toto la Moposina, Lucho Bermudez and Petrona Martinez), Latin (Fania All Stars, Irakere), African (Fela Kuti and Tony Allen), Jazz (Lionel Hampton), Funk (the legendary James Brown) and Rock (Red Hot Chili Peppers and Rage Against the Machine).

The result of this soundclash is a unique musical style and explosive on-stage energy, that has opened their path to many big festivals throughout Europe. Since 2005, La Chiva Gantiva has played in the biggest festivals in Belgium, Portugal, Holland and Germany. La Chiva Gantiva continues to grow and to build upon their compelling and inspiring musical universe.