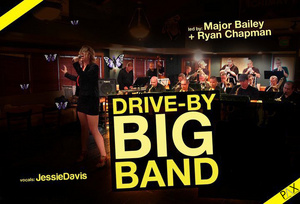 Drive-By Big Band is a professional big band that was formed by Ryan Chapman and Major Bailey in 2009 to promote jazz big band music . This group is comprised primarily of Miamiâ€™s top professional musicians and incorporates a number of talented University of Miami college students and professors in order to enhance the overall sense of community among local artists. Ryan and Major were both awarded the opportunity to continue their education at the University of Miami.