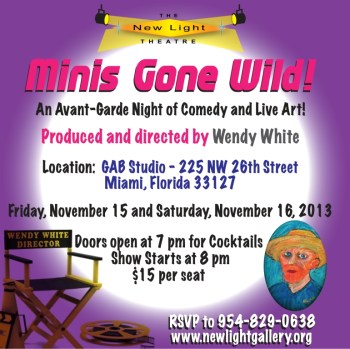 The New Light Theatre is proud to announce its brand new production â€œMinis Gone Wild!â€ – How does one perform a mini? Well, quickly of courseâ€¦

The playwright and director, Wendy White has written over 125 one-act plays and was a resident playwright, curator and director at the Kraine Theater in the East Village of New York City from 1984 to 1992, and at the Expanded Arts Theater Company from 1994 to 2001, in the Lower East Side of New York City. Her off-Broadway productions are the basis for her new venue at the New Light Theatre. She recently produced her one woman show; The Jewish Nun to sold-out audiences in Off-Broadwayâ€™s 59e59 Theatre and at the Edinburgh Fringe Festival in Edinburgh, Scotland.

The New Light Foundation is a 501(c)3 non-profit public foundation and has won numerous awards around the globe. The theatre company has performed everywhere from Amsterdam to Paris; from Miami to Los Angeles to New York City; and has tackled subjects relating to women, love, politics, and Shakespeare.