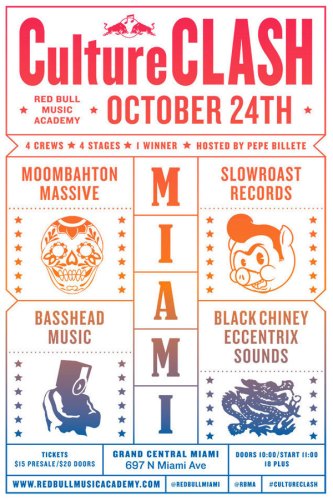 – True to a traditional Jamaican sound clash, each collective will bring in their own sound system and set-up shop on one of four individual stages at the music venue Grand Central Miami

– South Florida popular culture icon and YouTube sensation, Pepe Billete, will host the event, guiding the audience and the DJ crews through their battles with his trademark Miami satire and style.

– Culture Clash is more than just one of the fiercest musical battles around; itâ€™s a rare get-together of different genres and generations. Itâ€™s a celebration of sound system culture and its ongoing influence on hip hop, dancehall and dance music.

– Red Bull Music Academy Culture Clash promises to deliver an unforgettable night of the very best in cross-genre exploration. The event is open to fans 18 years of age and older. Tickets are available for $15 in advance and $20 at the door. Advance tickets can be purchased online at http://www.ticketfly.com/event/389771