The Idan Raichel Project with new album Quarter to Six 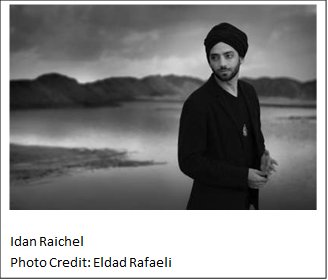 The Adrienne Arsht Center for the Performing Arts of Miami-Dade County is proud to present the return of the triple platinum-selling The Idan Raichel Project, an ever-changing ensemble of multicultural performers from Africa, the Middle East, Latin America and more, led by internationally-acclaimed singer-songwriter, producer and musician Idan Raichel. Launching the Centerâ€™s 2013-2014 Live at Knight Series, The Idan Raichel Project will perform hits such as â€œMi’Ma’amakimâ€ and â€œBoee,â€ as well as new songs from his album Quarter to Six on October 17 at 8:30 p.m. in the John S. and James L. Knight Concert Hall.

â€œWe look forward to welcoming The Idan Raichel Project back to our world-class stage. Raichelâ€™s cross-cultural music is beautifully inspiring and is a perfect fit for South Floridaâ€™s robust multiethnic community,â€ said John Richard, president and CEO of the Adrienne Arsht Center. â€œAt a time when headlines are dominated with news of war, itâ€™s artists like Idan Raichel that remind us to celebrate cultural diversity.â€

Since the release of its debut self-titled album in 2002, The Idan Raichel Project has been known for its fusion of Israeli pop music with Middle Eastern, African, Indian and global sounds. More than a decade later, Idan Raichelâ€™s unique musical style and ability to collaborate with a variety of artists continues to make an impact â€“ earning him one of the biggest-selling records in Israeli history and also catapulting him into a major figure in the international global music scene.

â€œIf I had called the album just â€˜Idan Raichel,â€™ people would have thought that Raichel is the main voice on all the songs. I wrote the songs and I arranged and produced them, but I perform them together with other vocalists and musicians. On the other hand, we are not a group. Itâ€™s something in between,” explains Idan Raichel. To date, more than 95 singers â€“ ranging 16 to 91 years old â€“ from dozens of different countries and cultural backgrounds have participated in the Projectâ€™s recordings or performances.

The Idan Raichel Projectâ€™s most recent album, Quarter to Six (2013), reflects on how to find peace at the end of life. The artist describes the albumâ€™s title as a metaphor for a crossroads within his own life â€“ a time where he felt his Project had reached a period of change, reflection and transition. Musically, the record is more acoustic than his previous ventures and blends his mellow voice with electronics and a diverse lineup of world musicians such as Portuguese fado star Ana Moura, Palestinian-Israeli singer Mira Awad, German counter-tenor Andreas Scholl, Colombiaâ€™s Marta GÃ³mez, Vieux Farka TourÃ© and a selection of some of Israelâ€™s top up-and-coming singers and musicians.

Prior to the release of Quarter to Six, Idan Raichel released four studio albums and a 3-CD collection of live recordings, launched a North American tour with longtime collaborator and Grammy Award winner India.Arie, and celebrated the 10th anniversary of The Idan Raichel Project with a series of sold-out concerts held at the Caesarea Amphitheater, an ancient Roman amphitheater near Tel Aviv. Idan Raichel has also had the privilege to perform at a Nobel Peace Prize awards ceremony and for President Obama at the Kennedy Center on Martin Luther King, Jr. Day. In addition, the Project has headlined some of the worldâ€™s most prestigious venues including New York’s Central Park Summer Stage, Apollo Theater, Town Hall and Radio City Music Hall; Los Angelesâ€™ Kodak Theater; the Sydney Opera House; Zenith and Bataclan in Paris; Londonâ€™s Royal Albert Hall and many international festivals.