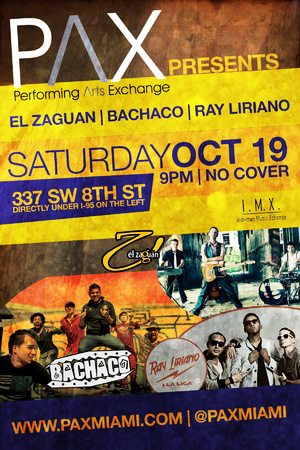 Since its formation in 2007, Bachaco has performed over 300 concerts all the way from Argentina to Canada sharing stage and performing at the same events and festivals as other big names in the reggae and world music scenes such as Israel Vibration, Toots & The Maytals, Tribal Seeds, Ozomatli, Luciano, Easy Star All-stars, Midnite, Cultura Profetica, Gondwana, Los Cafres, Los Pericos, Bahiano, Alika, Jarabe de Palo, Los Amigos Invisibles, WAR, King Chango and many more. Bachaco has also showcased during the SXSW and LAMC music conferences thanks to support from BMI.

Bachacoâ€™s members hail from Venezuela, Colombia, Jamaica, Puerto Rico, Peru and the U.S. allowing their songs to naturally flow in both English and Spanish but the true language Bachaco speaks is its own music and what they transmit: An Explosive International High Energy Groove! That is simply the result of the bandâ€™s own diverse range of nationalities. BACHACO is a true multi-cultural experience.

What is a Bachaco? The word Bachaco is the name given to a Leafcutter Ant in Venezuela. The same type of ant is found accross that Amazon Rainforest and in countries such as Panama, Colombia, Venezuela and Brazil. The insect is used by Venezuelan indians to create a â€œpicanteâ€ (hot sauce). We could say Bachaco is a musical Picante.

“Bienvenidos a vivir, bienvenidos a soÃ±ar” (welcome to live, welcome to dream) our first CD, brought us a lot of learning in different aspects of our life; in a musical and a personal way. After this dream came trueâ€¦ what it is next: work and work. Today El ZaguÃ¡n is in the process of exploration, where we have found new rhythms, new ideas, and a new road without losing our essence and the wave that represent El ZaguÃ¡n, giving us as a result song that will be heard soon and that probably would be in our next work.

However, If you haven’t heard about us until now; What is El ZaguÃ¡n?:

El ZaguÃ¡n is a rock group that has elements of reggae, salsa, blues, pop and Rock & Roll; with a lot of COLOMBIAN touch, and with the mix of letters about our own daily experiences, it gives fun spaces to whom heard the songs and to the group; giving as a result a music “sancocho” with a lot of flavor.

The band is made up by three musicians since 2008 that have been working on other projects during the past years, specially playing cover at some Medellin bars. They are: Juan Esteban Arango as the singer, Miguel Arango as the drummer and Lucas Alvarez on the keyboards.

At the moment the band is on the pre-production for the second album with the hand of Sound Node. Drums, percussion and bass were recorded in Medellin, keyboards in Bogota and guitars and voice in London.