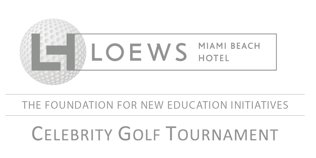 Entry into the tournament is $4,000 per foursome, which covers green fees for three players and one celebrity, premium gift bags, commemorative photo, breakfast, lunch and more.

Public school teachers spent $1.6 billion of their own money on classroom supplies and gear in the 2012-2013 school year, according to a report released in June 2013 by the National School Supply and Equipment Association (NSSEA), a trade association for educational product companies.

“We hope to exceed our contributions this year, which funds as many Miami Dade County educational projects as possible, and relieves the burden from our educators who spend thousands out of pocket on school supplies and instructional materials,” added Tonarelli.

In 2010, Loews Hotels celebrated the 20th anniversary of the Good Neighbor program by partnering with DonorsChoose.org in an effort to improve public education. Over the three years, Loews’ team members have raised funds by organizing car washes, bake sales, golf tournaments and making individual donations to support education in their local communities. The culmination of year round fundraising for Loews Miami Beach is the group-based 18-hole, scramble format tournament, held at the Miami Beach Golf Club. Since 2010, the tournament has raised nearly $150,000 in resources for classrooms and students across Miami Dade County.

“We are thrilled to participate, for the second year, in the Loews Miami Beach Celebrity Golf Tournament,” said Alberto M. Carvalho, Superintendent of Miami-Dade County Public Schools, and the Chair for The Foundation for New Education Initiatives. “It is through philanthropic donors, like the Loews Miami Beach Hotel that we are able to give back to the local schools in our area and fund innovations beyond the basics that will keep our schools, our graduates, and our community competitive in the decades ahead.”

In this year’s golf tournament, celebrity Chef Josh Capon from NYC’s beloved Lure Fishbar, and three time NYC Burger Bash winner, whose celebrity frequented restaurant in SOHO opens in South Beach this fall, will serve a gourmet seafood feast for lunch alongside the resorts’ Executive Chef Frederic Delaire. Each foursome will feature a celebrity player, with special giveaways and a top-notch silent auction with a multitude of sought-after luxury items.

“The support we have received from Loews Hotels in helping teachers across the country acquire the materials and resources their students need in the classroom has been tremendous,” said Charles Best, CEO of DonorsChoose.org.