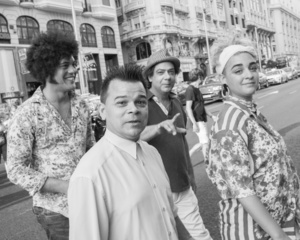 Picadillo, a musical group from Spain, presents its debut album, Las cosas de la vida. Picadillo was formed in August, 2012, in Lavapies, Madrid, when producer Hector Aguero along with two vocalists, Rey Rodriguez and Sol Ruiz joined and began a musical experiment that launched the project. Later joined with trumpeter, percussionist, Jochi, which added the key element to the classic sound of the band. When these musicians of cuban origin came together they created a musical â€œPicadilloâ€, (originally a creole recipe), revisiting vintage cuban rhythms like the danzon, boogaloo, cha cha cha and combining with New Orleans trad Jazz, second line, soul and country. They naturally create the link from Cuba to New Orleans. With energetic live performances, they capture audiences with their son electrico. Las cosas de la vida, was recorded at DoReMix studios in Madrid and mixed and mastered by Luis Duran at PM Records en Cuba, in Nov 2012. It was independently released and completed thanks to crowdfunding