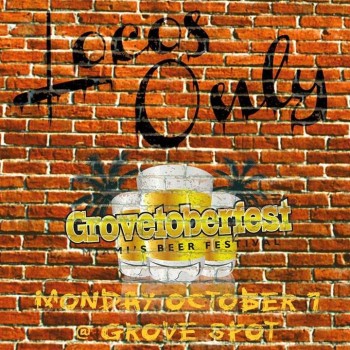 Loco is a word that although Spanish in origin, has entered the English lexicon and become part of popular culture. You would be hard pressed to find a person in the U.S. who did not fully understand the meaning of the word loco. It is used in everyday speech, in advertisements and even literature. It will soon join the ranks of other assimilated foreign word like lingerie, soufflÃ© and kindergarten. And rightfully so. It’s words like loco which give our language a little diversity…

Ok. Sorry. We misunderstood the writing assignment. This invitation is for Locals Only, not Locos Only. Let’s start again.

Craft beer is an amazing world. One that is really driven by the local communities and local breweries. This locally-sourced movement is popular in beer and other culinary fields. We are sure you’ve seen your share of farm-to-table restaurants and ones who will only serve and use local ingredients. In a similar way, local craft beer is all about keeping things close. Although names like Sam Adams, Dogfish Head and Magic Hat are national players, it would have never been possible with the support of their local market and local fan base. It is important to support your local breweries. At this point we have three commercial breweries in Miami-Dade and Broward, Schnebly – Miami Brewing, Wynwood Brewing, and Funky Buddha. There are a few more in the building process like M.I.A. Brewing, Biscayne Bay Brewing, Gravity Brewlab and others too. We also have several brewpubs like the venerable Titanic Brewing, Gordon Biersch, The Abbey and Organic Brewing. We also have, what we like to call, breweries to be. These are groups producing high-quality and innovative beers as they plan their entrance into the marketplace. We have several like Forth Age, Opus Ales, Invasive Species and Midnight City who have really been called into action and providing local craft beer fans with neat and edgy brews. The bottom line is that although we do not have (at this point) a large number of commercial brewing, we do have a strong number of local brewers producing great beers. Come get a sneak peek at what they’ll be pouring at Grovetoberfest at our 7th and final tasting, Locals Only on Monday Oct 7 at The Grove Spot.