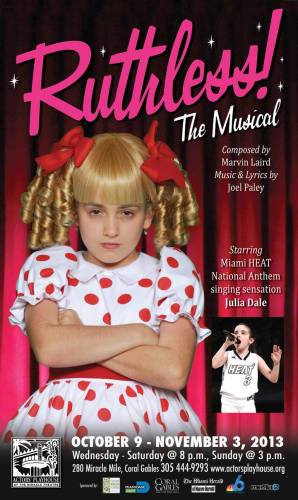 Ruthless! The Musical is a gem of a satirical comedy about the consuming drive for stardom. Suburban housewife Judy Denmark is dull as dull can be, but her daughter, Tina, is the greatest song-and-dance sensation to ever hit the third grade. She’s cute. She dances. She sings. And she would do anything to get the lead role in her school play…ANYTHING! Move over Honey Boo Boo, this outrageous and hysterically funny musical hit garnered rave reviews during its Off-Broadway run in the early 90s, and is ripe for a revival in today’s celebrity driven world.

Actors’ Playhouse’s production will feature pint-size powerhouse Julia Dale as Tina Denmark. National anthem singer Julia Dale has been a feature at Miami HEAT games since her rendition of “The Star-Spangled Banner” garnered international media attention during the NBA Finals in 2011, 2012 and 2013. Julia has since been dubbed the team’s “Good Luck Charm” and is now excited to add professional actress to her credits as she makes her regional theatre debut in Ruthless! The Musical at the Miracle Theatre.

Book and lyrics by Joel Paley, music by Marvin Laird

Performance Schedule: Wednesday – Saturday at 8 p.m., and Sunday at 3 p.m.