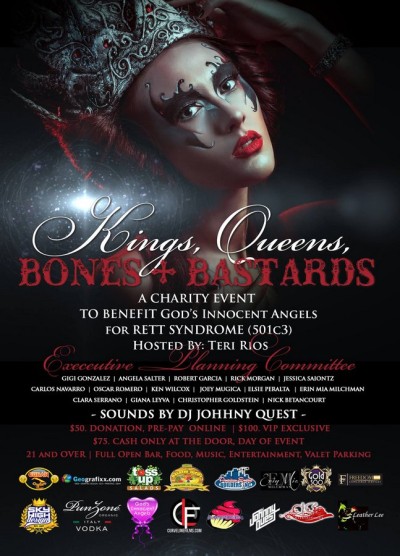 Tickets: $50.00 for Royal Palace (Pre-Sale General Admission) or $75 at the door
Private Chateau (VIP) Pre-Sale tickets: $100.00.
No VIP tickets will be sold at the door.
Purchase Tickets Online

This year marks the 6th Annual Halloween Extravaganza charity event benefitting Godâ€™s Innocent Angels and their efforts to create awareness and open a center for children affected by this debilitating disorder. Rett syndrome is a neurodevelopmental disorder of the grey matter of the brain that almost exclusively affects females with clinical features including small hands and feet and a deceleration of the rate of head growth including microcephaly. People with Rett syndrome are prone to gastrointestinal disorders and up to 80% have seizures. They typically have no verbal skills, and about 50% of individuals affected do not walk. Currently there is no cure for Rett syndrome, but studies have shown that restoring MECP2 function may lead to a cure.

This yearâ€™s Halloween Extravaganza Royal theme is â€œAn Enchanted Evening In The Royal Palaceâ€. The popularity of and exposure given to this yearly event has grown tremendously and as, in years past, will certainly prove to be the event of the season. October is RETT Syndrome month, and the event couldnâ€™t take place at a better time! This year’s event will be more extravagant than last year’s, including libations and food meant for Royal pallets, mesmerizing entertainment for a Kings court and a Kings ransom in prizes.

Be the Voice of Gia! GIAâ€™s mission is to create awareness and open a center for children and families affected by this debilitating disorder. To do this, we need your support on every level, not just financially, but by supporting our cause. The foundation is 100% volunteer-based and no founder or director of the organization takes any salary or benefits from the proceeds, which will be used to build the GIA Center for Children and Families affected with RETT Syndrome.

God’s Innocent Angels Foundation is a 501(c)(3) organization created in 2011 and actively raises awareness for children affected with Rett Syndrome, a developmental disorder affecting little girls worldwide (one in every 10,000 to 23,000 births). It affects little girls of all racial and ethnic groups, and it is rarely seen in boys. RETT syndrome causes problems in brain function that are responsible for cognitive, sensory, emotional, motor and autonomic function. These can include learning, speech, sensory sensations, mood, movement, breathing, cardiac function, and even chewing, swallowing, and digestion. RETT Syndrome is a developmental disorder, not a degenerative disorder. These girls will never have the ability speak.