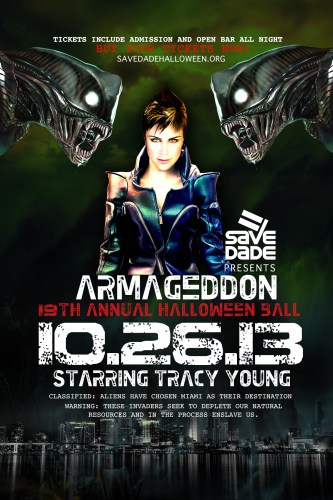 The countdown has begun. They are coming. We must seek shelter from the Invaders.

As you may be aware, there have been several isolated alien attacks in major cities across the globe. These Invaders seek to deplete our natural resources and in the process enslave us. They transform the humans they encounter into zombie-like warriors and slaves, expanding their army and support.

International Intelligence Agencies are predicting that the Invaders will touch down in South Florida on Saturday, October 26 at approximately 10:00 p.m. Do not panic. We must seek shelter at Resistance Central located inside the Miami Beach Convention Center. You will receive more instructions upon arrival and be given a liquid elixir that will make you immune to becoming a zombie slave. All citizens seeking refuge will be given the opportunity to officially join the Resistance and take to the streets to battle the Invaders. Those that choose not to fight will be allowed to join the organizational efforts at Resistance Central. Local authorities and Resistance fearless leader, TRACY YOUNG, have assured us that we will be safe from all alien attacks there.

Bring your friends and your loved ones. Notify your neighbors and colleagues. You must all plan to join the Resistance at the Miami Beach Convention Center. Itâ€™s a matter of life or death. The future of mankind depends on it.

Join SAVE Dadeâ€™s Young Guardians Society for a reception to honor young community leaders with the SAVE Dade Luminary Award for their commitment and dedication to equality and LGBT advocacy. Admission Includes: Premium Open Bar, Hors dâ€™oeuvres, special surprise performances and admission to the Halloween Ball at 10:00 p.m.

Halloween Ball – $100
Starring Tracy Young
10:00 p.m. to 3:00 a.m.
General admission will kick-off at 10:00 p.m. when the Invaders are scheduled to arrive. Guests will enjoy an evening of OPEN BAR, dancing, special performances, and a themed costume contest with over $1,000 in cash and prizes.

Join the Resistance between August 24th and October 1st to receive a special rate of $125 for VIP Admission and $90 for General Admission. Admission includes OPEN BAR.

* Tickets are now on sale.
Prepare for the worst at the best Halloween celebration of 2013.