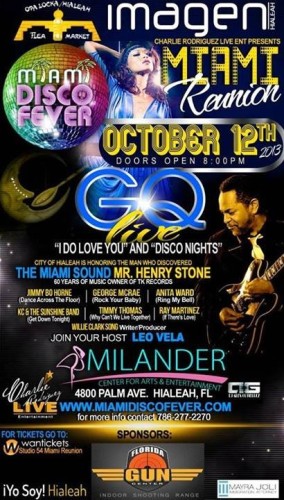 Welcome Miami Baby Boomers to Miami Disco Fever the event that will take you back to the glory years of Miami, Florida. The magical yearâ€™s of the 70â€™s 80â€™s and 90â€™s. The Miami Magic began in the early 70â€™s with the explosion of the world wide movement of the Miami Sound with the first disco record ever recorded â€œRock Your Babyâ€ by George Mc Crae at a Hialeah recording studio named TK Records. Remember Jimmy Bo Horne? With the disco mega hit â€œDance Across The Floorâ€ or what about the Hialeah High student named Harry Casey who started a band called KC and The Sunshine Band. What about the disco classic â€œRing My Bellâ€ by Anita Ward. Ray Martinez “If There’s Love” how many dance floors fill with that song. Yes the list goes on. Get the picture. Hialeah was a sleepy town during the 70â€™s while at the south end of the city a young man started a revolution in the music business. His name was Mr. Henry Stone he is known as the man who founded the â€œMiami Soundâ€. With over 25 million records sold during the 70s TK Records based out of Hialeah started the world -wide music movement that placed Miami on the international map of entertainment.

The historical significance of producing this event in Hialeah is evident. TK Records, Mr. Henry Stone will be honored at the Miami Disco Fever Reunion by the City of Hialeah at the cityâ€™s historical landmark and newly developed state of the art Milander Performance Art Center. Be part of history as the event will be filmed as a documentary of the Sound of Miami with Mr. Henry Stone.

O.S.G.
Performing a KC and the Sunshine Band Tribute

Join your host South Florida Radio Legend Leo Vela and Charlie Rodriguez Live Entertainment as we transform the historic Milander into the worlds most famous night club Studio 54. Music provided by the artist and DJ’s that created history.