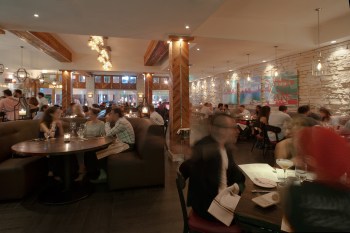 This fall, foodies and culinary thrill seekers will have even more reason to dine at Tongue & Cheek â€“ chef Jamie DeRosaâ€™s whimsical South of Fifth, SoBe eatery â€“ as chef DeRosa is bringing in some friends to make matters extra tasty starting in September. Launching Wednesday, September 25 with Top Chef alum Chef Lindsay Autry, â€KITCHEN COLLABâ€ is a trio of monthly special guest chef dinners which are sure to set tongues wagging and mouths watering.

In terms of themes and cooking styles, each kitchen collaboration (hence the seriesâ€™ name) will differ but the end result will be the same â€“ an unforgettable culinary experience featuring a not-to-be-repeated multi-course dinner created by DeRosa and truly talented guest chefs. Each dinner will be priced at $75 per person, excluding tax/tip/alcohol; featuring five amazing courses and some special surprises along the way. Seating is limited and tickets must be purchased in advance via http://tandcmiami.brownpapertickets.com/. Start time: 7:00 p.m.

Additional editions of â€œKITCHEN COLLABâ€ will follow on Thursday, October 17 with Chef Clay Conley of Palm Beachâ€™s Buccan and Imoto fame and Chef Paula DaSilva on Wednesday, November 20, who recently took the helm of 3030 Ocean at the Harbor Beach Marriott Resort & Spa in Fort Lauderdale.

Chef Lindsay Autry was born and raised in Fayetteville, North Carolina where she inherited a love of cooking at an early age, entering 4H cooking competitions. Spending time on her grandfatherâ€™s peach farm and alongside her Greek grandmother in the kitchen are among her childhood influences. Chef Lindsay describes her cuisine as â€œSouthern soul meets world,â€ a combination of nostalgic favorites and Mediterranean flavors. With â€œfarm-to-tableâ€ as a way of life growing up, Lindsay still takes her cues from seasonal, locally harvested ingredients when creating her classic yet refined dishes. A graduate of Johnson & Wales University in Miami, Lindsay honed her classic French cooking techniques under the James Beard Award-winning chef Michelle Bernstein, starting as a line cook at Azul at the Mandarin Oriental in Miami. Lindsay served as Executive Chef at the Omphoy Ocean Resort & Michelle Bernstein Restaurant in Palm Beach, Sous Chef at Fiesta Americana Grand Aqua in Cancun and she received international acclaim as the Chef de Cuisine at Las Brisas at the Fairmont in Playa del Carmen. She was named a Restaurant Hospitality â€œRising Starâ€ in 2008 and was one of three finalists on the 2011-12 season of Top Chef Texas. She is currently the Executive Chef at Sundy House Historic Inn, Restaurant and Botanical Garden as well as the Resident Chef for Swank Table in Loxahatchee Groves.