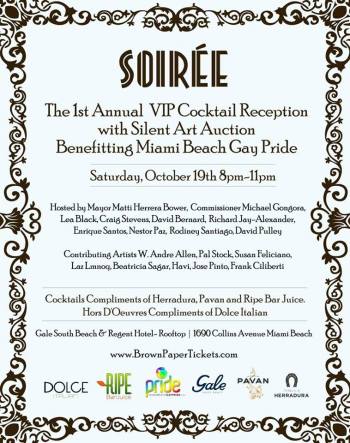 Proving that â€œPrideâ€ is a feeling expressed year-round by the South Florida LGBTQ community, Miami Beach Gay Pride will host â€œSoirÃ©e,â€ a VIP cocktail reception and silent auction, to raise funds to help produce next yearâ€™s Pride parade and festival, April 11 â€“ 13, 2014. Created by popular local promoter Edison Farrow who is the Marketing Chair for Miami Beach Gay Pride, â€œSoirÃ©eâ€ will take place Saturday, October 19, from 8 p.m. to 11 p.m. on the rooftop of the Gale South Beach & Regent Hotel.