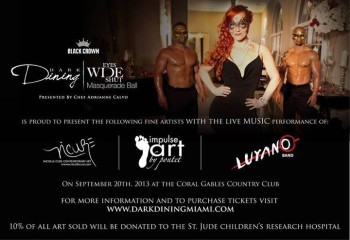 Chef Adrianne Calvo, the innovating Miami, Florida-based culinary artist who has forged a formidable reputation in the area’s restaurant scene, is pleased to announce the very first Dark Dining event to take place outside of the charming confines of her eponymous and critically acclaimed eatery. The Dark Dining Eyes Wide Shut Masquerade Ball, a formal gala event that will serve to contribute to one of the most established pediatric charitable causes in the country.

Long considered one of Miami-Dade Countyâ€™s preeminent venues for social and charity events, the Coral Gables Country Club was selected as a location capable of offering the ideal combination of elegance and style in which to commemorate what promises to be a momentous evening. A portion of all proceeds from the proceedings will benefit Chef Adrianneâ€™s Make It Count Foundation and St. Judeâ€™s Childrenâ€™s and Research Hospital.

The Dark Dining format, which entails that participants remain fully blindfolded in a particularly dimly lit setting to heighten their enjoyment of a multiple course meal, was initially established as a social trend in Europe. Beginning in September 2009, Chef Adrianne became the pioneer of the Dark Dining phenomenon in the South Florida culinary scene by hosting three like-themed events at her Vineyard Restaurant and Wine Bar that fall. Previously, Dark Dining events had been implemented in several major U.S. cities, but Miami had remained an untapped market. Always willing to embrace the new and unique in the culinary field, Chef Adrianne and her staff have progressively established the Dark Dining concept over the last 4 years as a required experience for food aficionados in South Florida.

â€œWeâ€™ve been extremely pleased with the ambiance and energy that each of our previous Dark Dining nights has infused into our restaurant,â€ commented Chef Adrianne. â€œWhen the opportunity was presented to leverage its increasing popularity to raise the profile of a cause as important as St. Judeâ€™s, it became our mission to take this unique experience to the next level.â€

Chef Adrianne has enjoyed a near-decade long relationship with Memphis, Tennessee-based St. Judeâ€™s Childrenâ€™s and Research Hospital, which serves as the leading private pediatric oncology research institute in the United States. Now in its 51st year of serving pediatric cancer patients and their families, St. Judeâ€™s is staffed by a considerably distinguished and accomplished collection of doctors, nurses, researchers, and support personnel. For the past several years, Chef Adrianne and many of her staff have conducted annual week-long visits to St. Judeâ€™s, during which they attempt to bring comfort and respite to the terminally ill children and their parents and caregivers.