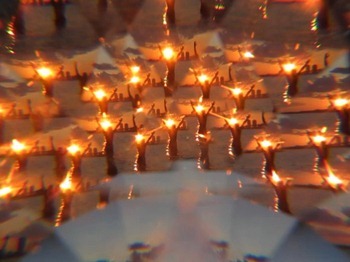 The TM Sisters engage with refraction, the bending of light and sound waves as they travel through different mediums. In Prismavolt, these mediums include natural elements, the body, creative practice, and human consciousness, and occur at sites as intimate as molecular anatomy and as mysterious as the deep sea. The artists use refraction to map moments of tranquility between emergent subjectivities and the invisible forces at work upon them.

Four wading figures become engulfed by mother-of-pearl irisation. It is a kinetic conversation between bodies and waves, an exchange of power, a brilliant photometeor. The iridescence is the result of film shot and projected through prisms. Like Goethe’s phenomenological inquiry into color, for which Newton’s optical spectrum is but one case study among boundless potential experiences, the TM Sisters pursue a generous interpretation of light’s manifestations and energies. In destabilizing light, the artists also complicate ontological views of creativity, calling instead upon aesthetic irruptions that are anarchical, autopoietic, prismatic.

In another film, a chandelier prism obscures the face of a figure while its hair blows freely in the wind. "There is no nature," Derrida writes, "only the effects of nature: denaturalization or naturalization."[1] Prismavolt takes place in the perpetual becoming of these effects. Nature, the artists demonstrate, is simultaneously refraction, body, and environment. When, in a third film, the outstretched arms of two figures sink spinning into the evening ocean, it is catharsis. Such clarity does not belong to a stagnant hierarchy of achievement, but rather to transversal cuts across planes remade new through simultaneous experiences.

Prismavolt’s attunement to the relationship between body and spirit is informed by the artists’ training in neurokinetic therapy and prismatic healing methods. The TM Sisters rethink the rainbow with a new pallet of colors correlating to experiences of consciousness reached by muscle-testing. Artworks in collage and sculpture exaggerate the aesthetic geometry of refraction. Prismavolt is not only a material exhibition, but also an institutional performance in conversation with Deleuze and Guattari’s project of schizoanalysis, an imminent meta-modeling of subjectivity. In contrast to psychoanalysis, schizoanalysis aims not to reduce and interpret, but rather to expand and produce.

In the legacy of Flavin, the TM Sisters explore light as a medium. In the spirit of Bas Jan Ader, they launch themselves across the other skin of the ocean. After Kandinsky, they advocate art’s agency in synesthetic spirituality. Perhaps Prismavolt’s deepest resonance, however, is with the Swedish Space Corporations’s 2010 project PRISMA, which launched two synchronized satellites in order to test formation flying and rendezvous technologies. After two months of maneuvering as one, the satellites separated from each other for the first time. How free is refraction? How discursive is color? How fixed is subjectivity? Light and sound, air and water, duel satellites, or the artists’ collaborative duo does not represent a movement beyond the borders of the body, but a movement of the borders themselves.