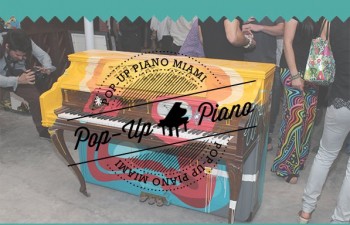 The Related Group is sponsoring â€œPop Up Piano Miamiâ€ concert series across Miamiâ€™s hottest neighborhoods. Pianos painted by artists, set up all over town – in Brickell, Midtown and Beach, will feature performances by top current artists to be announced. Pop up Piano is non-profit that helps arts programming in the city.

Pop-Up Piano Miami (PUPM), a public arts project created by Uniting Local Artists, is back for its third edition during the week of Art Basel Miami Beach (December 5 â€“ 8, 2013). This PUPM has big plans which will be announced soon. Every year PUPM brings to light a unique organization that promotes the transformational power of music in a community. Keeping in line with PUPMâ€™s mission, the executive committee has selected Guitars Over Guns Organization (GOGO) as the 2013 beneficiary.

Guitars Over Guns provides after-school mentoring to at-risk youth through music education and performance as an alternative to the gang recruitment, drugs, and violence typically dominating their environments. GOGO targets the most vulnerable middle-schoolers, pairing them with professional musicians who use contemporary music as a means to teach young people the skills to be successful both in and out of school. GOGO is partnered with Communities in Schools of Miami (CIS), the largest dropout prevention organization in the country, which selects the schools most in-need of the program, provides mentor-training, and helps provide the students with instruments and a multitude of services to ensure their success.

The goal of PUPM 2013 is to support future PUPM community endeavors and GOGOâ€™s programming. In order to reach this yearâ€™s goal, PUPM will host a series of events during the famed art week including a Pre-Art Week Preview Mixer, a pop-up performance at a surprise location, and a Special Benefit Concert. The ticketed, concert-style event will feature three recognized musical acts. Event goers will have the opportunity to enjoy the performances of a mainstream musician, indie musician, and a local Miami musician.