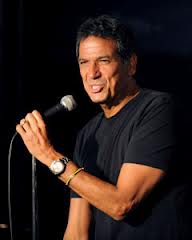 Ticket Price: $35
Synopsis:
Mellowing With Age… On The Inside
Bobby Collins heart felt and witty humor will engage the audience with a clever blend of characterizations and hilarious observations to which everyone can relate. The Grammy-nominated comedian is known for his live stage performances, cable TV specials, numerous talk show appearances, feature film roles, six comedy CDs and three DVDs — the latest of which, Telling It Like It Is, was praised by the New York Times. Collins also recently wrote a book, On the Inside, and will be signing copies following his performance. Donâ€™t miss who the New York Times calls The Most Natural Comedian Working Today,