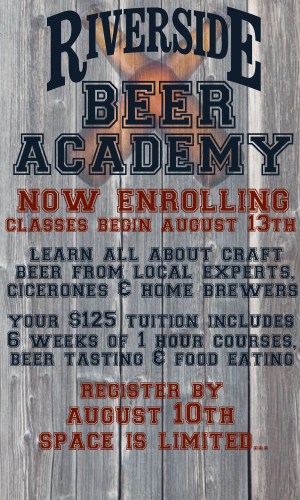 Do you know the difference between a stout and a porter? A lager and an ale? If not, do yourself a favor, hop on the craft beer bandwagon and join the Riverside Market Beer Academy. With Craft beer more popular than ever, Julian Siegel, Riverside Market owner and beer enthusiast, wants to share his knowledge with others to make beer as enjoyable as possible.

After much success with the inaugural session of Beer Academy, Riverside Market has decided the learning must go on. It will once again be a six-week course focusing on all things beer. Each week for one hour students will be educated on a new beer related topic from local and national cicerones, home brewers and master brewers all while sampling some of the 500+ beer selection Riverside has to offer. Featured hosts include award winning home brewer Eric Guerro from Angry Union Brewing, Evan Benn beer columnist for Esquire Magazine, Adam Fine, President of Native Brewing and Brett Hubbard, Host of By the Glass.