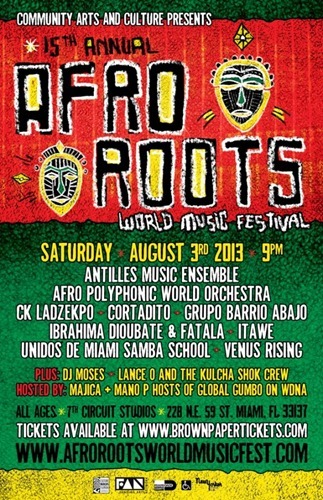 For 15 years, the Afro Roots World Music Festival has celebrated the evolution of African culture by featuring some of the best performers from all over the Caribbean, the Americas and African countries such as Senegal, the Ivory Coast, Guinea, Mali and The Republic of Congo. This global connection through the universal language of music has helped the festival evolve into one of Miamiâ€™s most culturally diverse events. The festivalâ€™s signature youth program,
â€œLet The Children Have Musicâ€ is a FREE program providing live music, dance demonstrations, show-and-tell style presentations by festival artists and art projects for children ages 3 to 12.

The Little Haiti Cultural Center will be the  host location to this yearâ€™s celebration Saturday, August 3, 2013. To commemorate the festivalâ€™s 15th anniversary, CAC wants to produce an extra special "Let The Children have Music" program and invite a special musical guest.

Your donation will support CACâ€™s efforts to produce a special "Let The Children have Music" program thatâ€™s not only fun for kids of all-ages, but showcases the diverse cultural roots that exist in their community. It is our sincere desire to bring world culture to Miami, and your contribution will aid our effort in continuing to do so.

The evening will feature various showcases produced for this special anniversary year. Highlights include the Afro Polyphonic World Orchestra, a world music orchestra that collaborates with invited guests artists from around the globe. Itawe (pronounced E tah wi), lead singer of Locos Por Juana will be performing songs from his new reggae solo project. The Antilles Music Ensemble, representing the early days of Caribbean dance music from 1900  1950 and all points in between. This year the festival will also present two West African artists including master percussionist and founder of UC Berkeley’s African Music and Dance Ensemble,  CK Ladzekpo from Ghana, and Master Balafonist and Griot, Ibrahima Dioubate from Guinea. Also representing Africa and collaborating with CK Ladzepko is the all women percussion and dance troupe Venus Rising. From Colombia we have Grupo Barrio Abajo performing their blend of Afro Colombian music from both coasts. Representing Brazil is the  Unidos de Miami Samba School directed by Paulo Gualano. Finally, returning to the festival for a second year in a row is Cuban Son duo Cortadito, which will be expanding to a quintet for this year’s special performance.