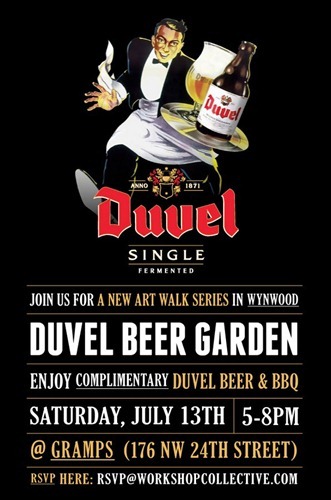 Less than a year after breaking into the Miami and South Florida marketplace, Duvelâ€™s lighter, draft-only golden ale â€“ Duvel Single, will be the feature beer at this monthâ€™s Wynwood Art Walk Beer Garden! The event is part of a new art walk series featuring complimentary Duvel Single and Sparkyâ€™s Roadside Barbeque at Gramps Bar. Please RSVP to rsvp@workshopcollective.com.

Duvel Single is the lighter golden ale from Duvel. The secret behind the crisp and complex flavors of Duvel Single is Duvelâ€™s commitment to using only the best quality ingredients, and in the complicated and specific brewing and refermentation process that takes more than three months to complete. Once brewed, the brew master and his staff taste each batch after approximately 30 days. At this stage the beer is called â€œsingle-fermented.â€ The beer has Duvel taste but the alcohol and carbonation are lower and the taste is lighter and crisper.