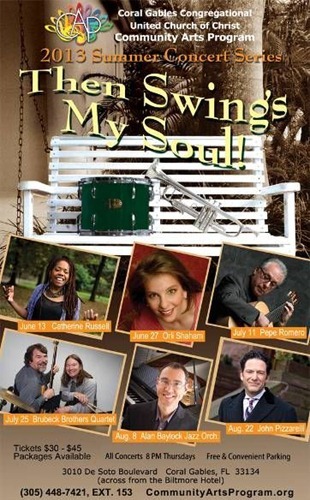 Free and convenient parking is available.

This summer, in a quiet Miami neighborhood and within the Coral Gables Congregational United Church of Christ’s intimate, historic Spanish-revival style setting, concert goers will have the unique opportunity to be awed and entertained by the music industry’s most-talented and revered classical and jazz figures.  These artists will perform and delight audiences on the Community Arts Program (CAP) 2013 Summer Concert Series titled Then Swings My Soul!

The Community Arts Program (CAP) Summer Concert Series has entertained more than 62,000 people since it began in 1985.  The Series has grown into a valued tradition and, more recently, part of a Community Arts Program that also provides music education to children within its Conservatory for the Arts.  "The Community Arts Program (CAP) Summer Concert Series is a rare opportunity to hear world-renowned artists in the intimate and beautiful Coral Gables Congregational United Church of Christ," says Shelton G. Berg, University of Miami Dean of the Phillip and Patricia Frost School of Music.  "The CAP Conservatory for the Arts provides high-quality music education to children, many of whom would otherwise be denied access to the wonder of music and the beauty of the artistic spirit."

"We are very excited to again present a diverse and world-class line up of artists," says Mark Hart, Executive & Artistic Director of the Community Arts Program.  "It’s an honor to welcome concert goers from across the state and as far away as Europe, and rewarding to see the growth of our music education program for kids!  In all, we’ve come to provide exceptional cultural and educationally-enriching experiences for more than 3,000 children and adults each year!"

June 27 – Orli Shaham, classical pianist
The Summer Concert Series is thrilled to present Orli Shaham, who touts an impressive international reputation as one of today’s most gifted pianists.  Recognized for her grace, subtlety and vitality, Ms. Shaham is a consummate musician also praised for many recording collaborations with her brother, violinist Gil Shaham. In a recital of Chopin, Brahms, and a unique presentation of Mussorgsky’s Pictures at an Exhibition, concert goers will experience Orli Shaham’s prodigious skills and interpretations admired by critics over four continents.  This concert will be an evening of purely delightful music making!

July 25 – Brubeck Brothers Quartet
Chris and Dan Brubeck had the unique privilege of growing up listening to, studying with, and eventually playing alongside one of the great jazz legends of our time, their father, Dave Brubeck.  Add to this heritage the fact that the musical tastes of Chris and Dan were forged in the stylistically innovative 1960’s, and you have an exciting combination of musical elements to draw upon!  With Dan at the drums and Chris on electric bass and bass trombone, an exciting evening goes over the top with the addition of guitarist Mike DeMicco and pianist Chuck Lamb.  This promises to be a dynamic and compelling 2013 Summer Concert Series event, with a loving tribute to Dave Brubeck!

August 22 – John Pizzarelli
World-renowned jazz guitarist and singer, John Pizzarelli,closes the 2013 Summer Concert Series with flair!  Using performers like Nat "King" Cole, Frank Sinatra and Joao Gilberto and the songs of composers from Richard Rodgers, George Gershwin to James Taylor, Antonio Carlos Jobim and Lennon & McCartney as touchstones, John has established himself as one of the prime interpreters of the Great American Songbook and beyond, bringing to his work the cool jazz flavor of his brilliant guitar playing and singing.  Joined by his brother, bass player Martin Pizzarelli, this will be an evening that concert goers will not want to end!