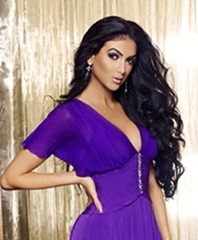 Fresh off the release of her hit single â€œMoon of Dreamsâ€ featuring T-Pain, Rising star Egine is set to take over the Heineken Dwntwn Miami Concert Series with a free performance.

Born to play music, Egine inherited her gifts from her father, an accomplished Bass player, and mother, a singer and vocal instructor.  At the age of three, Egine and her family left the natural, financial and political unrest in her native Armenia and migrated to Russia.  Her musical instruction started shortly thereafter at the age of seven and continued through high school, culminating in her enrollment at the State Music College of Pop & Jazz Arts in Moscow. Over the years, she has earned recognition for her craft, bringing home the Young Talents of Russia Award and being named the â€œGrand Champion Performerâ€ at The World Championship of Performing Arts.  Since then, her career has sky rocketed as she won Best New Artist award in the Armenian Music Awards 2012, and reached 2 Million YouTube views on her 1st U.S. released single "If We Let It Go."

Egine broke into the Miami music scene with â€œMoon of Dreams,â€ which brought in 3.7 million hits on her YouTube channel, as well as garnered buzz from leading press outlets such as MTV, Sirus XM, Associated Press, Fuse, Artist Direct, and more.