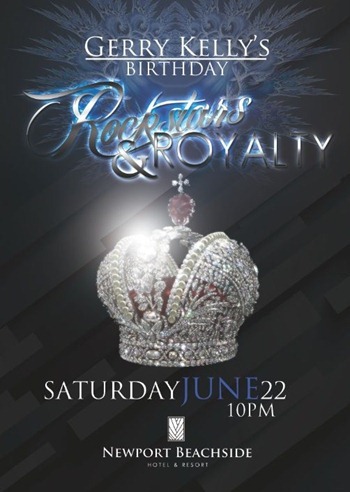 For guests that would like to dine before the celebration, KITCHEN 305 has created a special Surf & Turf dinner for $35 per person beginning at 7:00 p.m. For VIP table service, Kitchen 305 will also have bottles special throughout the evening, including Absolut Vodka bottles for $100 (++) and Premium Bottles including Grey Goose, Black Label, Patron and more for $175 (++). For dining or table reservations please call305.749.2110. The official celebration begins with Red Carpet arrivals at 10:00 p.m. followed by an open CasAmigos Cocktail and hors d’oeuvres reception until 11:00 p.m.

Newport Beachside Resort and Hotel will play to host to over 1,000 of Kelly’s closest friends for this one-of-a kind extravaganza! The event will be held in the main Grand lobby of the spectacular resort, in their award-winning restaurant Kitchen 305 and poolside, boasting stunning views of the Atlantic. The grand lobby and adjoining Kitchen 305 will be transformed into a palatial setting by renowned designers 3DX. The celebration will begin at 10:00 p.m. with a cocktails and hors d’oeuvres reception and will be followed by a spectacular evening filled with music, performances, dancing and fun! In keeping with the "Gerry Kelly style", this year’s theme will be Rockstars and Royalty!

A Former Couture Fashion designer, Kelly has played a significant role in placing South Beach and Miami, on the world’s nightlife map and has been credited for opening some of the most incredible hotspots in the Southern United States. Venues include, Sean Penn’s Bash, Shadow Lounge, Level, Karu & Y and The Fifth, to mention a few. He is hailed as a Miami’s Nightlife Guru and as the Associated Press very eloquently described him, "Gerry Kelly is to Nightlife what the Queen of England is to Royalty. " His events and productions have attracted the "Who’s Who" of the Celebrity A-List, as well as international renowned personalities, such as Former President Clinton, Sean Combs a.k.a P. Diddy, Busta Rhymes, Angelica Houston, Jack Nicholson, Matt Damon, Russell Simmons, Secretary of State Hillary Rodham Clinton, Attorney General Janet Reno, Lauren Hutton, Faye Dunaway, Paris Hilton, Lenox Lewis, Evander Holyfield, Ana Nicole Smith, Enrique Iglesias, Carlos Ponce, Sonya Braga, Nelly Furtado, Chaka Khan, Donna Summer, Ivana and Ivanka Trump and many more!

Joining this year’s celebration will be none other than George Clooney and Randy Gerber’s, Casamigos Tequila. This refined and exceptional tequila has won several national awards and received recognition and accolades from even the most discerning connoisseur. Creating Gerry Kelly’s Royal cake will be non-other than, the internationally renowned and award winning dynamic duo, Carolina Montoya and Luis Fernando Puga of Unique Designer’s Cakes.  Their edible scale creations have been featured in publications across the globe and have attracted many celebrity clients.

Spearheading the entertainment for the evening will be Choreographer, Pamela Cannellas from Hot Jam Entertainment, with a bevy of performers and stage shows throughout the evening. In addition, get ready for a stunning informal Haute Couture Modeling by JB Couture Designs. Spinning thru the night will by DJ RetroKidd, in the grand lobby, playing open format and top 40 and DJ LaTrice in Kitchen 305.