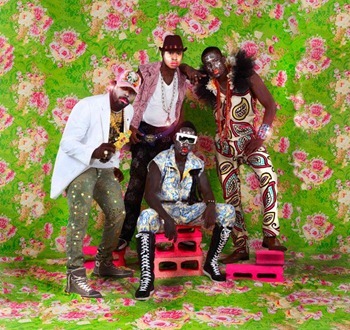 FrostArt (The Patricia & Phillip Frost Art Museum at FIU) introduces two new exhibitions, both of which feature art as a tool to establish identity: How we see ourselves and how we perceive others, now and in the past. The two exhibitions, Six Degrees of Separate Nations: Ebony G. Patterson and Peterson Kamwathi, and Borders of Paradise: In the Eyes of Explorers, will have an opening reception on Saturday, June 8, 2013, at the Frost Art Museum, from 6pm-8pm. The wine and hors d’oeuvres reception is open to the public and free of charge.

The featured artists in the Six Degrees of Separate Nations, Ebony G. Patterson and Peterson Kamwathi, are from vastly different parts of the world, Jamaica and Kenya, respectively. Despite the geographical distance between them, they ironically share much in common. The influence of colonialism and the repercussions of colonial history have impacted how these artists perceive themselves today, as well as how they place themselves in proximity to the "other". A significant theme underlying both artists’ work – and thus the exhibition – is the examination of social behavior, specifically that of performance and theatricality. Ebony’s documentation, staging and appropriation of contemporary fashion, its insignia and pattern, explore the implicit link of dress code to social and political expression. Peterson Kamwathi, on the other hand, depicts theatrical social performance without appropriating its modes; rather taking on the role of an observer, he extra cts modes of behavior, staging scenarios that express the farcical nature of masquerade inherent to social conventions, and imposed political norms that are both inherited from colonial rule, and re-appropriated.

The exhibition, curated by Claire Breukel, will feature a collaborative installation where the artists will meet for the first time and respond to each other’s work. The Six Degrees of Separate Nations exhibition will run through September 8, 2013. The opening reception will be preceded by a panel discussion with the artists, the curator and guest speaker, University of Miami Professor Patricia Saunders, at 4:00 p.m., also at the Frost Art Museum. Like the reception, the panel discussion is open to the public and free of charge.

The second exhibition opening on June 8, Borders of Paradise: In the Eyes of Explorers, focuses on historical identity. Imagined and exaggerated depictions of the new continent and its offerings persisted through the nineteenth century, satisfying the appetites of curious Europeans hungry for tales of mysterious lost paradises and evolving primitive worlds. This exhibition, curated by Cynthia Duval of the Museum of Arts and Sciences in Daytona Beach, features maps, etchings and engravings, many of which appeared in literary works, which helped to reinforce and shape the Old World’s skewed perception of life in the New World. The Borders of Paradise exhibition will run through August 25, 2013.

In addition to these new exhibits, the following current exhibitions will be on display at the Museum on June 8:
â€¢ JosÃ© Manuel Ballester: Concealed Spaces
â€¢ Deep Blue by Javier Velasco
â€¢ Spanish Colonial Art: The Beauty of Two Traditions