Banned film The Attack Screening and Q&A with Exiled Director 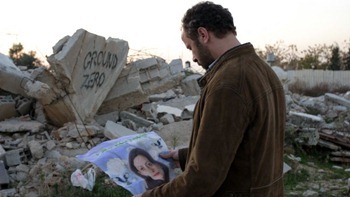 An Arab surgeon living in Tel Aviv discovers a dark secret about his wife in the aftermath of a suicide bombing.

The Attack begins with a hero unusual to cinema: a Palestinian who is a citizen of Israel and a surgeon in a Tel Aviv hospital. Dr. Amin Jaafari (Ali Suliman) is on the verge of receiving a prestigious award from his peers when he gets a frantic cell phone call from his wife Siham. It is the last time he will ever hear her voice. A bomb goes off in a nearby cafÃ©, and dozens of victims are brought to the hospital for treatment. Siham is among the dead, but not among the victims; incomprehensibly, this educated, upper-middle class woman was carrying the suicide bomb.

Aminâ€™s world is turned upside down; how could his own wife, the love of his life, commit such an atrocity? The Attack is about Aminâ€™s overwhelming feelings of futility as he attempts to make sense of a terrorism born in his own home. Yet writer/director Ziad Doueiriâ€™s film is not despairing. It makes horror personal; it asks us what changes can we make in our own world? The recent wounds of the Boston marathon bomb give us an even more visceral emotional participation.

In a shocking and discouraging twist, in mid-May of this year, the League of Arab States instructed its 22 member nations to boycott The Attack, as Lebanese-born Doueiri shot the film in Israel, where it is forbidden for Lebanese citizens to travel. All release plans for this important and topical, dialogue-creating film in those nations have now been cancelled. Currently exiled in Paris, Doueiri will participate in a live question and answer session with the audience after the screening. â€“ Jaie Laplante

This screening is co-sponsored by Coral Gables Art Cinema.