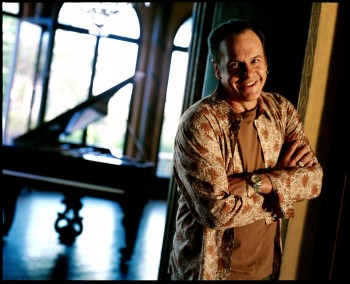 KC & The Sunshine Band is still as widely popular today as they were when they first danced onto the music scene nearly 40 years ago. Harry Wayne Casey â€“ â€œKC,â€ for short â€“ developed a unique fusion of R&B and funk, with a hint of a Latin percussion groove, yielding an impressive string of hits like â€œGet Down Tonight,â€ â€œThatâ€™s The Way (I Like It),â€ â€œDo You Wanna Go Partyâ€ and â€œShake Your Booty.â€ With sales of over 100 million records, nine Grammy nominations, three Grammy Awards and an American Music Award, KC & The Sunshine Band was one of the most progressive bands of the â€˜70s and is credited with changing the sound of modern pop music.

Miamiâ€™s own Harry Wayne Casey (KC), started working in the music business at age 17, performing menial tasks around the T.K. Records/Studio complex in his hometown. Together with Richard Finch, a budding studio engineer prodigy at TK Records, they formed KC & The Sunshine Band in the early 1970s.

Their first record, Blow Your Whistle, made the top 15 on the R&B chart. With the release of the self-titled triple platinum second album in 1975 came the group’s first major US hits with “Get Down Tonight,” “That’s the Way (I Like It),” â€œBoogie Shoesâ€ and â€œRock Your Baby.â€ KC & The Sunshine Band became the first act to score four #1 pop singles in one 12-month period since the Beatles in 1964. Three of those singles crossed over to become #1 R&B, as well. The 1976 album, Part 3, also went triple platinum and yielded the #1 singles “I’m Your Boogie Man,” “(Shake, Shake, Shake) Shake Your Booty” and “Keep It Comin’ Love.”

The bandâ€™s momentum continued when â€œBoogie Shoesâ€ was included on the Saturday Night Fever soundtrack. â€œPlease Donâ€™t Goâ€ and â€œYes, Iâ€™m Readyâ€, a duet with high school friend Teri DeSario, also became favorites. KC returned to the charts in 1983 with “Give It Up”, which also hit #1 in the UK.

KC won a songwriting Grammy in 1976 for best R&B song for â€œWhere is the Loveâ€ which was recorded by Betty Wright. He also received Grammy Awards for Album of the Year, as well as Producer of the Year in 1978 for his work on the Saturday Night Fever soundtrack.

In 1995, he recorded Get Down Live, a concert album that was gleaned from his performances in Los Angeles, New York, Chicago, Peru and Melbourne, Australia. KCâ€™s â€œThe Best of KC and The Sunshine Bandâ€ went gold in 1999. In 2001, KC released an album of all-new material entitled Iâ€™ll Be There For You. Proceeds from the title song, released as a single, were donated to the September 11 relief effort.
In 2002 KC received the coveted Star on the Hollywood Walk of Fame, where Dick Clark and music producer Michael Lloyd turned out to honor him. That same year, Thatâ€™s The Way I Like It â€“ The Harry Wayne Casey Story was published.

Since then, the band has enjoyed a surge in popularity. Their music has been featured in over 75 movies, video games, sporting events and TV shows including Desperate Housewives, American Idol and Dancing With The Stars. Music acts like White Zombie, Baha Men and BeyoncÃ© Knowles have covered his music. Their infectious grooves and bass lines have been sampled by R. Kelly, Snoop Dogg and Trick Daddy, to name a few.