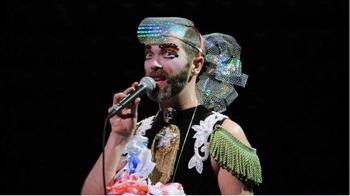 From New York: the inimitable and wildly flamboyant Taylor Mac presents his latest work â€œThe 20th Century Show,â€ an incredible visual feast and concert consisting of one song from each decade of the 20th Century  presented as â€œa performance ritual to help the audience let go of the 20th century and move into the 21st.â€

Taylor Mac is a playwright, actor, singer-songwriter, and sometime director and producer.  TimeOut New York has called him, â€œOne of the most exciting theater artists of our timeâ€ and American Theater Magazine says, â€œMac is one of this countryâ€™s most heroic and disarmingly funny playwrights.â€