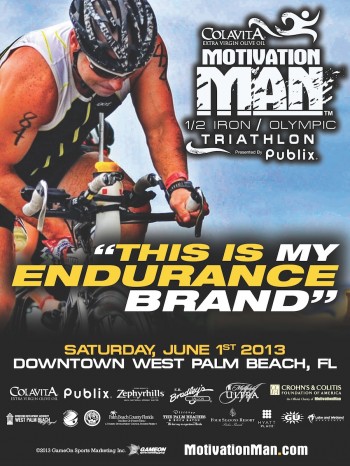 Events to benefit Crohnâ€™s and Colitis Foundation of America

The 2012 Motivation Man race attracted over 600 participants and was the first triathlon ever held in downtown West Palm Beach. Organizers are hoping the event will sell out at 1,200 participants this year. The event consists of two races: an Olympic-distance triathlon (.94 mile swim, 25-mike bike, 6.5 mile run) and a Half-Ironman (1.2 mile swim, 56 mile bike, 13.1 mile run).

The event will encompass all of downtown West Palm Beach, including the Intracoastal Waterway, Flagler Drive and Southern Boulevard. Road closures on race-day include 56 miles of Southern Boulevard, from the Intracoastal in West Palm out to Belle Glade; Flagler Drive and parts of South Clematis, Greenwood and Washington. In addition, the Intracoastal will be closed to boat traffic. The action-packed weekend includes the Publix Health and Fitness Expo, as well as a weekend kick-off party and a post-race awards ceremony and after-party at the famous E.R. Bradleyâ€™s Saloon on the waterfront.

â€œWest Palm Beach is the ideal backdrop for a triathlon, with beautiful roads, the Intracoastal Waterway and the tremendous support from the City and Palm Beach County,â€ said Steve Tebon, CEO of Game On Sports Marketing. â€œWe look forward to welcoming regional, national and international athletes to beautiful South Florida for the 2013 endurance event.â€