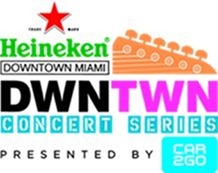 Heineken DWNTWN Miami Concert Series Presented by Car2Go
Downtown Miami residents and visitors can enjoy an evening with some of Miamiâ€™s hottest concert talent; Domino Saints, 2NYCE, Cecy and a special dance performance by Marquese Scott. This event is free and open to the public.

Headlining the sixth seasonâ€™s first show:
Domino Saints are an explosive Urban/Pop Duo from Puerto Rico with a mind-blowing fusion of Latin sounds and urban music along with captivating bilingual lyrics. Their sound is pure energy created by a combination of Dancehall Reggae, Electronica with a trademark Latin style appealing to all audiences around the globe. Recently, Rhapsody named them as one of their favorite for 2013 and Billboard just named them top 10 to watch in 2013. Website: www.dominosaints.com
2NYCE (pronounced: Two Nice), has quickly receive great public support as well as from important Latino leaders of industry in music and media, which has positioned him in the international market. 2NYCE stands out as one of the most promising urban/tropical figures emerging from Miami, Florida. Website: www.im2nyce.com
Cecy B is a talented Latina Rapper/Singer/Songwriter. Born and raised in Southern Cali, She continues to make waves and break barriers in the industry as a talented Latina Femcee with an impressive rap flow. Website: www.cecybworld.com
Marquese Scott became a YouTube sensation with his performance of "Pumped Up Kicks Dubstep". With over 85 million views, the video is "simply mind-blowing," according to CBS. Ellen DeGeneres called it "Incredible" and Gather named it the "best dubstep ever seen or performed by anyone â€“ period." His video was featured on the front-page news of MSN.com, The Huffington Post, CBS News, and YAHOO! News. YouTube Channel: www.youtube.com/channel/HCeOtzM_O5Jjs