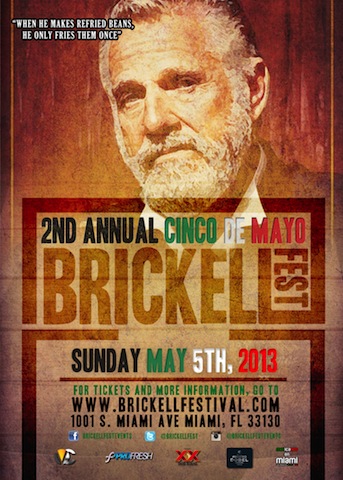 “We are extremely excited in bring the community together for Cinco de Mayoâ€ said Javi Zayes, Brickell Fest Creator

Guest will indulge in bites from El Vato, Brickellâ€™s finest mexican restaurant; while drinking Dos Equis beer. Tequila drinkers are in for a special treat with specialty margaritas created by miamiâ€™s top mixologist. Doors open at noon families with children are welcome to attend the fiesta before 6pm, children under 10 years of age are granted free admission.

For adults who want the â€œVIP Treatmentâ€ Brickell Fest welcomes them inside a tent with a private bar, beer garden, priority seating, private restroom and much more. Admission tickets range from $28.00 – $56.00 including admission cost and a complimentary beer or margarita.

â€œWe take pride in creating a festival in the heart of brickell, like no otherâ€ said Angel Sanchez, Brickell Fest Creator.