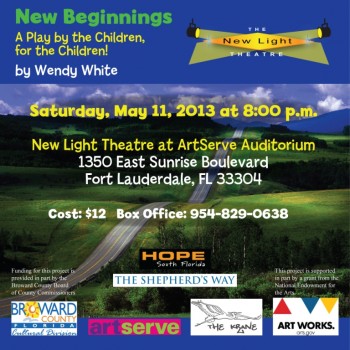 New Light Theatre is proud to present â€œNew Beginningsâ€, an original play written and developed by the children residing at the Shepherds Way/HOPE South Florida homeless shelter. The children will showcase their acting and singing talents, as they remind the audience that art transcends any circumstance.

Wendy White, President of the New Light Foundation, Inc, directs and produces this labor of love as a result of a dream to help children learn to express themselves via the medium of playwrighting. Wendy has been working year-round at the shelter in the childrenâ€™s after school program, “ACES” (After-school – Art – Academics- Collaborations for Educational Success), and will ultimately present a documentary which shares the childrenâ€™s hopes and dreams through their eyes.

â€œI am deeply honored to help the children who participate in the ACES program and reside at the homeless shelter how to express and share their stories â€“ the programâ€™s goal is to give the children hope by being heard and encouraged through their circumstances – what results is a creative way to have fun and joy through the arts,â€ states Wendy, also a Playwright and Artist.

Donations are accepted for the children and their families residing at Shepherdâ€™s Way/HOPE South Florida. Tickets are $12 and can be purchased online at: www.newlightgallery.org or over the phone at: 954.829.0638.

â€œHOPE South Florida is a partnership, a lead organization in a network of partner churches and organizations working together to provide a holistic Christian response to homelessness in our community. The Shepherd’s Way/HOPE South Florida provides shelter and life skill classes to homeless and hurting families throughout Broward County crossing denominational lines, Protestants and Catholics alike came together, united to serve individuals and families living on the streets.â€ For more information visit:https://www.hopesouthflorida.org/

The New Light Foundation, a 501(c)3 non-profit public foundation, has won numerous awards around the globe, has performed everywhere from Amsterdam to Paris; from Miami to Los Angeles to New York City; and has tackled subjects relating to women, love, politics, and Shakespeare. More information about the writer and director, Wendy White can be found on her website:www.newlightgallery.org.